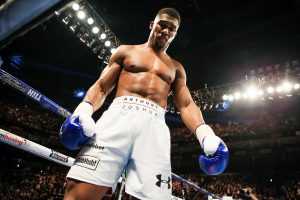 With Anthony Joshua’s much anticipated World Heavyweight Title defence this weekend, and with Tyson Fury and Wladimir Klitschko’s rematch in a few weeks, we look at the boxers with the best nicknames. I hope you’ll agree that there have been some brilliant nicknames over the years.

If there are any boxers reading this, please don’t hurt me!

Now. For the thousands in attendance and the millions reading around the world on NetBet Sport, LET’S GET READY TO RUUUUUMMMBBBLLLEEE!

He was The Baddest Man on the Planet in the 1990s when he famously bit Evander Holyfield’s ear off in the middle of a fight. His facial tattoo makes him one of the most recognisable faces in the world.

“I am a Gypsy King, king of all gypsy men.” Fury proclaimed this shortly before beating Klitschko in their first battle. The current WBO and WBA Heavyweight Champion puts his belts on the line again on 9th July.

Known as Dr. Steelhammer, Klitschko has possibly the best nickname from any sport. The Ukrainian is the second longest heavyweight champion of all time and has the record of ending undefeated streaks, with 12 victories.

The Pazmanian Devil fought across three weight divisions over a 21 year boxing career that ended in 2004. The man from Rhode Island couldn’t have hailed from anywhere further away from Tasmania, but his nickname is just as memorable as his 30 knockouts in 60 fights.

Lazcano’s nickname is probably more memorable than his career. He lost to Ricky Hatton in a one sided fight in 2008 and hasn’t been seen since. He does however have an impressive 37 wins, with 27 of them coming via knockout.

The man that every boxing fan loves to hate. His mind games and trash talking are legendary, but don’t endear him to popularity, nor does his knockout of Oscar De La Hoya, who lowered his guard before taking a left hand. However, he is one of the most successful boxers of all time, with a record of 49-0.

Known as Pac-Man, his long awaited fight with Mayweather took place in 2015, but was regarded as a major disappointment. He’s adored in his home nation of the Philippines and currently serves as a Senator in their Congress.

Nikolay Valuev, the Beast from the East

The Beast from the East definitely lives up to his name. The Russian was 7 feet tall, with a reach of 85 inches. His final fight saw him lose to David Haye in 2009, but his record of 50 wins in 53 fights ensures that The Beast won’t be forgotten anytime soon.