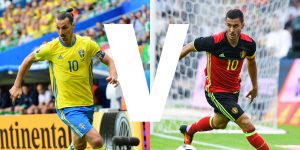 Tonight is the climax of the group stages in Euro 2016 and one of the games is between Sweden and Belgium in Group E. Italy have already confirmed their status as group winners, but there’s still plenty to play for in this group. Belgium currently sit second and are priced at 2/35 to qualify, whilst Sweden are in third place and are priced at 33/10.

This game could well be Zlatan Ibrahimovic’s final international game. Failure to win would see the Swedes eliminated, however Zlatan will be eager to ensure that this doesn’t happen. He’s priced at 7/4 to score tonight, but here lies the problem for Sweden. They’ve had two shots on target in the entire competition, both of which were by Ciaran Clark. Clark is Irish, therefore as a whole, Sweden haven’t had a shot on target in Euro 2016. Despite this issue, Sweden can still progress to the knockout stage with a win this evening. Odds on a Swedish win are at 4/1, but they’ve played well below their standards so far. Erik Hamren is set to start Marcus Berg up front alongside Zlatan, meaning that former Manchester City man John Guidetti drops to the bench. The Euros have not been a happy tournament for Sweden. They’ve lost five of their last seven games and have only kept one clean sheet in that period. They’re priced at 11/4 to keep one tonight, however Belgium’s attacking talent could be too much to withstand for 90 minutes.

Belgium have been a mixed bag in the tournament so far. They were hopelessly outplayed by Italy in their first match, but were irresistible in their second. The disappointment of the 2014 World Cup still hangs over them, but they’re keen to make a better impression here. Romelu Lukaku bagged a brace against Ireland and has scored six goals in his last six games. He’s favourite to score first tonight at 4/1, whilst Kevin de Bruyne has played a part in 10 goals in his last 10 games for Belgium, including scoring 5. He’s priced at 41/20 to score at any time this evening. They can still drop down to third place in the group, but a draw tonight would see them secure the runners-up spot. They haven’t drawn a game in the European Championships since 1980, but you can get odds at 47/20 on them to draw tonight.

Everything points in the direction of a Belgian win this evening. The odds are 5/6, whilst the talent in their team is far superior to the Swedish team. The Swedes are dependent on Zlatan, but he’s been collecting the ball deep in midfield, rather than on the edge of the box, which reduces his impact. He’s struggled to make an impact in the tournament and although he’s a prolific goalscorer, he could end up empty handed at the end of this tournament. As for a score prediction, get Belgium to win 1-0 at 9/2.