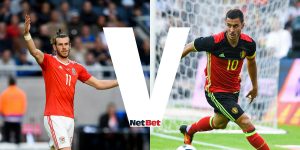 The Welsh fairy tale has reached the quarter final stage, but it faces a formidable obstacle in a Belgium team who’ve improved as the tournament has progressed. The Belgians are understandably favourites for tonight’s quarter final at 4/5, but beware of the Welsh dragon, who are more than capable of springing a surprise at 4/1. A semi-final against Portugal on Wednesday awaits the winner of this game.

Wales claimed 4 out of a possible 6 points against Belgium in the qualifying stages and this will surely weigh heavy on the minds of the Belgian players. They weren’t high scoring encounters however, with a goalless draw in Brussels, before Gareth Bale scored a late winner to win 1-0 in Cardiff. Bale has proved that he’s the star of the Welsh side, and has been one of the stars of the tournament so far. Priced at 7/4 to score at any time this evening, he’ll have to score for Wales to stand any chance of progression. Marshalled by battle hardened Ashley Williams, the Welsh defence has only conceded 3 goals in the tournament, with all 3 coming after the 56th minute. They’re priced at 17/10 to concede in this period again. Williams left the field against Northern Ireland with a shoulder injury; however he’s been passed fit and is set to start. There’s no way that he’d want to miss this game and he’ll want to play, regardless of the status of his injury. The Welsh have never made the semi-finals of a major tournament before, but are priced at 5/2 to qualify. 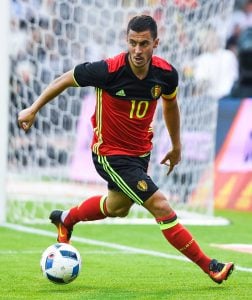 After a slow start in their first match against Italy, Belgium finally hit their stride against a poor Hungary team in the round of 16. Eden Hazard regained the form that so desperately eluded him last season, and backed at 13/5 to score this evening, he’ll look to continue his run of form and potentially alert some European clubs to his availability this summer. Romelu Lukaku is another who’s enjoyed a good tournament so far and is the favourite to score first this evening at 4/1. The defence could be a worry though. Jan Vertonghen has been ruled out for the remainder of the tournament, whilst Thomas Vermaelen is suspended. The Welsh could look to profit from this, and Thibault Courtois is priced at evens to keep a clean sheet.

Match Prediction
It’s interesting to note that Chris Coleman has set Wales up with three defenders at the back and two wing backs. It’s the same formation that Italy play with and the Belgians desperately struggled to score against. One of the joys of knockout football is that anything can happen. Wales could sneak a victory tonight, with odds of a 1-0 win at 35/4. However, Belgium’s quality could prevail in this game. Extra time could play a factor however, and a 1-1 score line is priced at 6/1.