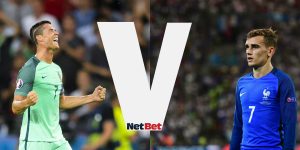 After a month of international football action, the 24 teams that qualified for Euro 2016 have been whittled down to the final two. Portugal are set to meet host nation France at the Stade de France on Sunday night, with a winner set to be crowned. Portugal lost to Greece in their only other European Championship final back in 2004, whilst France are hoping to replicate their team of 1984 and 2000, and win a third final. France are favourites heading into the match, priced at evens.

France’s first victory over Germany in a major tournament since 1958 has seen them progress to the final, with the favourites tag applied to them. Unless there’s a minor miracle in the final, Antoine Griezmann is set to be named as the Euro 2016 Golden Boot winner after his brace in Marseille. He’s scored six goals in the tournament and is the favourite to score anytime in the final, with odds of 33/20. France’s other star of the semi-final was Paul Pogba. The Juventus star opened talks with Manchester United earlier this week for a record breaking £100 million move, and although not a main goal threat in the French team, he’s priced at 31/4 to score first. Arsenal’s Olivier Giroud has handled the burden of first choice striker well, netting three times in the tournament so far. If Pepe is unavailable for the final, Giroud could fancy his chances against Bruno Alves who looked lost at sea against Wales in the semi-final. Giroud to score first is 9/2. France have scored 9 goals in the knockout stage so far and you can get them to score first in the final at 20/29.

Portugal saved their first victory in 90 minutes in the tournament until the semi-final, defeating Wales 2-0. Ronaldo finally made an impression in the competition, scoring a header before his scuffed shot ended up at Nani’s feet, which the new Valencia man finished off. Ronaldo’s at odds of 11/5 to score in the final. Bayern’s new signing Renato Sanches has impressed in the tournament and there are signs of a bright future when Ronaldo finally calls time on his international career. The Portuguese tactics are designed to strangle the opposition, not in the same style as Italy, but in their ability to completely lower the tempo. If they’re leading after 70 minutes which is available at 3/1, then expect them to be able to see out the game and win the tournament.

Match Prediction
The much maligned French defence proved resolute against Germany in the semi-final and having only conceded 5 goals in the tournament, Hugo Lloris is priced at evens to keep a clean sheet in the final. Portugal have conceded the same number of goals as France, but unlike the host nation, they’ve struggled at the other end of the pitch. However, an early Portuguese goal could force France to chase the game. This is possible, but it’s difficult to see past France in the final. A French victory with a scoreline of 2-0 is available at 27/4.