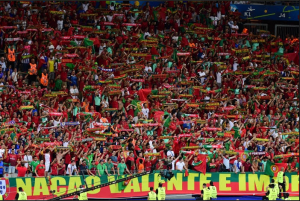 Euro 2016 is over and whilst we sit around, contemplating what life will be like for the next month without football, we have a quick look back at the numbers that were involved in Euro 2016.

Prior to Sunday’s final between Portugal and France, there had never been a final that had finished goalless after 90 minutes.

Aaron Ramsey and Eden Hazard were key providers for their teams in the Euros, with the Premier League duo providing four assists each for their teammates, the most in the tournament.

Antoine Griezmann finished up with 6 goals in the Euros and it was the highest total by a single player in a tournament since Michel Platini in 1984. Whatever happened to him…?

Ronaldo made himself the centre of attention in the tournament, both on and off the field, but his goal against Wales saw him equal the record for most goals in European Championships history. He also became the first player to score in four Euros finals.

Renato Sanches became the youngest player to feature in the final of the competition. The Portuguese youngster was one of the young stars of the tournament and will be playing in Munich next season.

Ronaldo set another record by making the most Euros finals appearances of any player.

The Icelandic wall Hannes Halldórsson made the most saves in the tournament, denying the opposition more than five times per match. What does it say about the defence and that England couldn’t beat them?

An England stat, and of course it’s not positive. They’ve now played the most European Championship matches without lifting the trophy.

Kingsley Coman was the fastest player at Euro 2016, reaching 32.8 km/h. Unfortunately Olivier Giroud was some way behind, whilst other pacesetter Per Mertesacker retired from international action after the last World Cup.

Age is just a number. That’s what Gábor Király said before the tournament. The Hungarian goalkeeper became the oldest player to play in the European Championships and a “National Tracksuit Bottom” day took place in Hungary in his honour.

It was the tournament of countries beating their bogey teams in the competition. The most notable of these was Portugal beating France in the final for the first time in 41 years. Others include Germany beating Italy and France beating Germany.

Ronaldo again… He had 45 shots in total on goal, 17 more than any player, but only managed 11 shots on target.

Portugal averaged just 51.6% of possession in the tournament. The 12th highest of the 24 teams.

France’s defeat in the final was their first major tournament loss on home soil in 56 years. After winning tournaments in 1984 & 1998 their winning run came to an end on Sunday night.

There were some memorable penalties taken in the Euros, not all of which were positive. Simone Zaza’s will forever be remembered as being terrible, but just two thirds of penalties that were awarded in regulation time were converted, the lowest rate since 1972.

Robert Lewandowski had a quiet tournament, but he scored after 100 seconds against Portugal in the quarter-final. This is the second fastest goal in Euros history after Dmitri Kirichenko’s goal against Greece in 2004 (67 seconds).

Despite numerous draws and dull fixtures in the tournament, there were 108 goals scored in the 51 games in Euro 2016. On average a goal was scored every 44 minutes.

Nani’s goal against Iceland represented the 600th goal in the European Championships in its 56 year history.

Portugal’s inability to win games in 90 minutes saw them play the most minutes of any nation at a major tournament. Goalkeeper Rui Patrício was ever present in the tournament.

Top 5 Euro 2016 Disappointments
Living the dream, Netbet customers enjoy Euro 2016 in style with a “once in a lifetime experience”