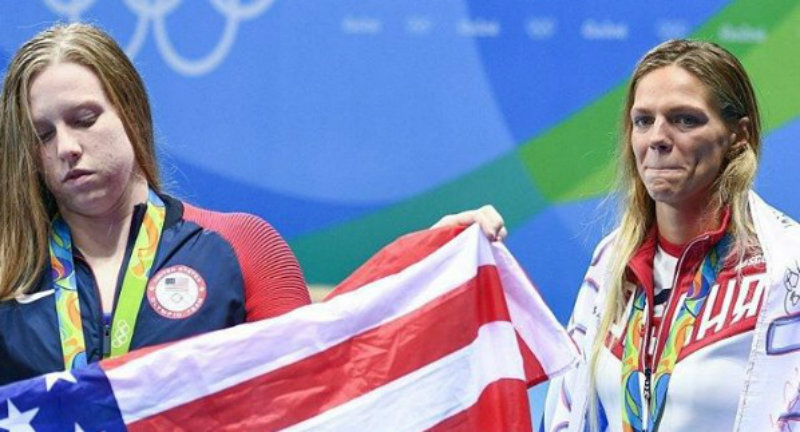 The Olympics are remembered for poignant moments. Two of Rio’s abiding memories so far have taken place in the swimming pool. The first was Syrian Yusra Mardini, representing the Refugee team who won the first heat of the 100m butterfly but didn’t qualify for the semi-finals.

The other happened in the semi-final of the women’s 100m breaststroke, when Russian swimmer Yulia Efimova raised her finger at the end of the race, signalling that she was “No1”. The crowd overwhelmingly booed her. Why? Not because she’s Russian, but because in May 2014 she was banned from competition for 16 months for testing positive for a steroid hormone.
She was thrown out of the Olympics two weeks ago in light of the purge on Russian drug cheats, but she was reinstated just before the games began. Behind the scenes, American swimmer Lilly King was equally as condemning as the crowd, and was caught on camera with a disapproving facial expression.

Like many participants in the Olympics, she’s unhappy at the fact that she’s had to compete against those who’ve transgressed and failed drugs tests. Morally, she’s absolutely right. But it would be a lot easier to accept her stance if members of her own team had perfect records. The fact is that they don’t.

Usain Bolt suggested that there was no guarantee that he’ll be defending his 100m title against a “completely clean field”. Two of Bolt’s rivals, Americans Justin Gatlin and LaShawn Merritt have both served drugs bans. Gatlin is a serial offender, banned for two years in 2001 and caught again in 2006, this time serving a four year ban. He protested his innocence, but the reality is that whatever he says, his reputation has been tarnished.

Another American Tyson Gay was stripped of his London 2012 silver medal and banned for a year, a lesser punishment because he offered to tell the authorities how it was done and who helped him. It’s an admirable quality to aid the authorities, but it doesn’t take away from the fact he’s guilty.

Upon hearing this news, Usain Bolt said “it’s the stupidest thing I’ve ever heard. The message should be: If you cheat, you’re going to get kicked out of the sport.”

Never has a truer word been said and the behaviour of athletes cheating to win has shrouded the Olympics in cynicism and mistrust. The Russians are an easy target, considering the state-sponsored doping allegations and the McLaren report, but over 100 athletes from other nations have served doping bans. Therefore there shouldn’t be a reason for other nations to claim a moral high ground when they themselves have failed to prevent doping.

Both Usain Bolt and, in particular, Michael Phelps have shown that they’re honourable Olympians by taking part in optional drug testing on top of the mandatory testing and the vast majority of other athletes in the Olympics follow the same procedures.

The issue is, and stems from the fact that the doping authorities and WADA are in a permanent race, in which they will always be losing. Athletes will always be ahead in terms of sport science and having the ability to cover up drugs.In addition to them being ahead in terms of science, they’re also ahead as there appears to be no actual punishment if found guilty. After all what’s a couple of years if it doesn’t cover the Olympics? Gatlin and Merritt could still end up competing in the most important race in the sport. It’s for these reasons that the authorities will forever be playing catch-up. It’s been said before and I’ll say it again. Cheats don’t win and if you cheat, there should be no place for you in the Olympics.