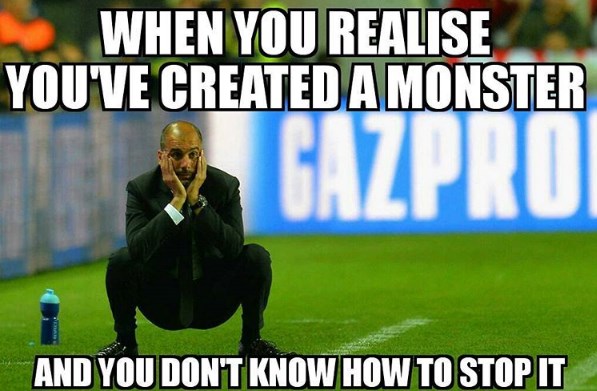 The third week of group action in the Champions League threw up some great talking points for English teams. Let’s have a quick look over what happened.

Pep Guardiola’s return to Barcelona didn’t go as he would have hoped. City’s 4-0 loss highlighted the gulf in class between the two sides and there’s still work to do at the Etihad. City didn’t play disastrously, but Messi’s first goal was poor defending and as soon as Bravo got sent off, they were chasing shadows. Guardiola decided to leave Sergio Aguero on the bench for the game and had they won, it would have been labelled as a piece of managerial genius. The move backfired on him and it showed that when the big games come, Aguero is not guaranteed a start.

Mesut Ozil showed his class against Ludogorets as he scored his first professional hat-trick in Arsenal’s 6-0 victory. His contract expires at the end of next season and it’s imperative that Arsenal do everything they can to ensure that he re-signs. The same can be said for Alexis Sanchez who was impressive again and whose contract status is the same as Ozil’s. Theo Walcott continued his fine run of form and the Gunners can qualify for the knockout stages with victory in the return fixture against Ludogorets.

Tottenham will rue their missed chances in the first half. Vincent Janssen put the ball in the back of the net, but was flagged offside. He later hit the bar with a header, with Erik Lamela’s follow-up well saved. It was a game of two halves, with Spurs facing a second half onslaught from Bayer Leverkusen and it required a magnificent save from Hugo Lloris to deny Javier Hernandez and ensure that Spurs left with what could be a valuable point.

Leicester’s surrender of the Premier League title to focus on the Champions League seems to be reaping rewards. The Foxes are five points clear in Group G and their victory over Copenhagen on Tuesday night will have put down a marker in the group. They look likely to avoid the European superpowers in the last 16 stage.