On 1st December 1886, factory workers in Woolwich formed Arsenal as Dial Square, named after the heart of the Royal Arsenal complex and one month later, the team name was changed to represent the whole complex. Now known as Royal Arsenal, the club spent much of their early years playing in South East London.

Royal Arsenal renamed themselves again in 1893, as Woolwich Arsenal, and 20 years later, the club moved to their new stadium in Highbury, and with the stadium transition, another name change beckoned and they became simply known as The Arsenal.

Their current home colours of red shirts with white sleeves and white shorts has become synonymous with the club, but they weren’t the original club colours. In fact, they were a charitable donation from Nottingham Forest. Shortly after Dial Square’s formation, the club struggled to find a kit, but after receiving a donation, the shirt used was a dark shade of red with white shorts and blue and white hooped socks. These colours have reappeared twice in Arsenal’s history. The first time was in the 1966/67 season, but this was deemed unpopular and the white sleeves returned for the next season. The second time was in 2005/06, the club’s final season at Highbury which coincided with a commemorative shirt.

This kit design lasted until 1933, when it changed to the now-iconic shirt design of red with white sleeves. There are two stories suggesting the origin of the now-famous kit design. The first is that manager Herbert Chapman spotted a supporter in the stands wearing a red sleeveless sweater over a white shirt, while the other suggests that the shirt was inspired by cartoonist Tom Webster, with whom Chapman played golf. There’s no definite confirmation as to which is true, but regardless of that, these colours have gone on to symbolise the club.

Up until 1969, Arsenal’s away colours consisted of a white shirt with either black or white shorts, but for the 1969/70 season, the club launched an away kit featuring a yellow shirt with blue shorts. The Gunners reached three consecutive FA Cup finals between 1978 and 1980 in what was fast become a lucky yellow and blue strip. Since then, the yellow away kit has been almost as symbolic as the home kit. However, there have also been many different colours in the away strip, including two-toned blue shirts, metallic gold and dark grey.

Arsenal wore this shirt in their First Division title success in 1990/91, which saw them lose just once in the league all season, a 2-1 defeat away at Chelsea in February 1991. Alan Smith was their top goalscorer, with 27 goals in all competitions. Other players who wore this shirt included David Seaman, Tony Adams, Lee Dixon, Steve Bould, David Rocastle and Paul Merson. 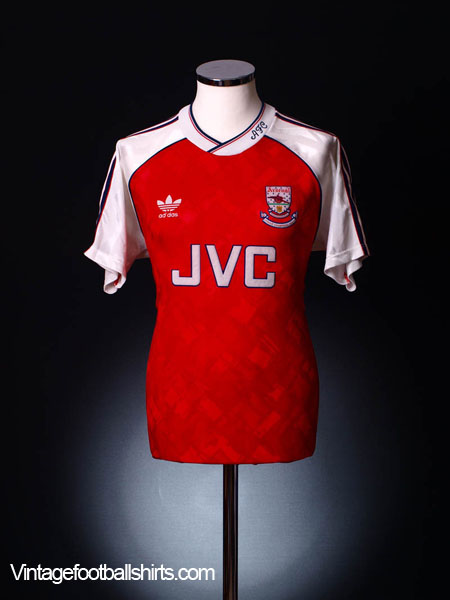 This was Arsene Wenger’s first full season in charge at Highbury and it finished with the Gunners winning their first Premier League title and an FA Cup double. Marc Overmars and Emmanuel Petit were the marquee signings at the start of the season, but it was Dennis Bergkamp who finished as the top goalscorer. 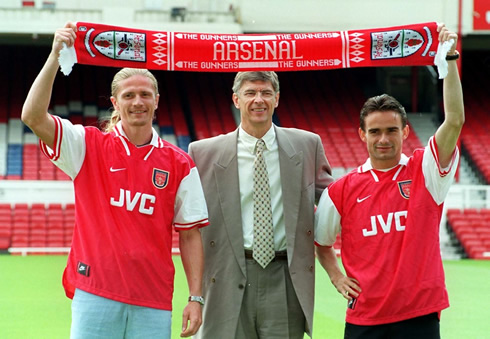 The first away kit on this list, this shirt featured the “lucky” yellow with a horizontal blue stripe across the middle. Worn by legends including Overmars, Bergkamp and Patrick Vieira, it was used over two successful seasons for the Gunners. 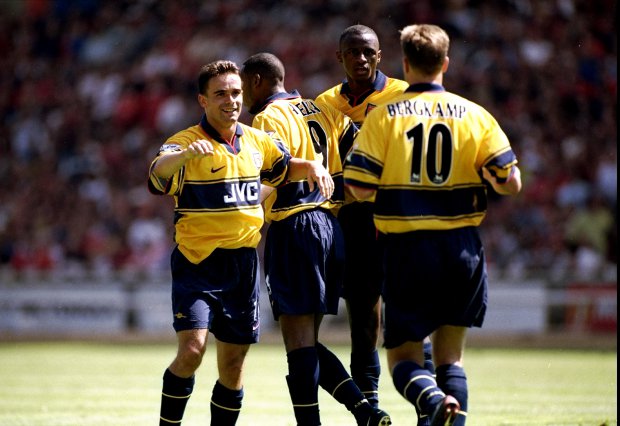 This wasn’t the most successful season for Arsenal, as they finished second in the league and had early eliminations in the cup tournaments. They did however finish as runners-up in the UEFA Cup. The shirt however remains a classic, featuring the red and white sleeves. 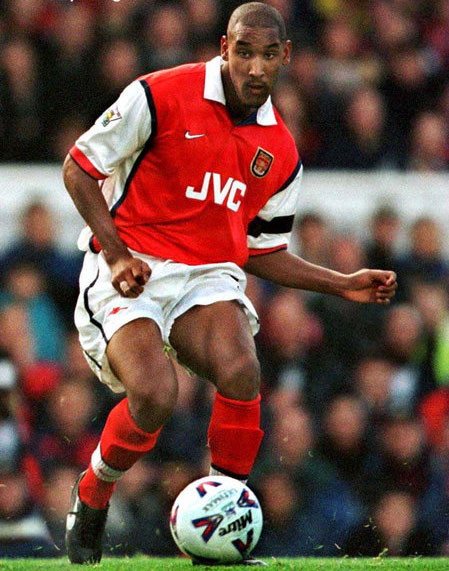 This shirt is not only possibly the best on this list, but it was also worn by the best Arsenal team of all time. This is of course the shirt worn by the Invincibles of 2003/04 who are now immortalised in history, as they’re also the last Arsenal team to win the league. Thierry Henry was their star player, scoring 71 goals over the two seasons. 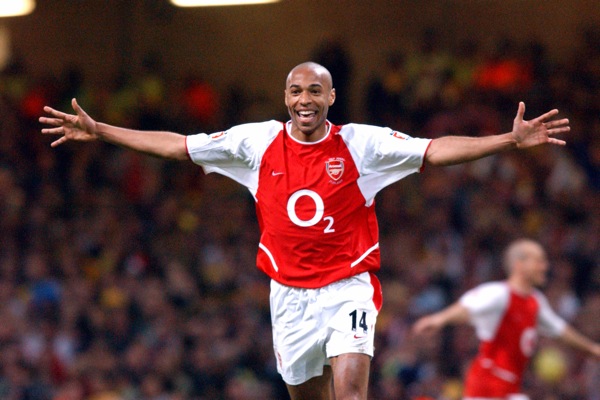 Arsenal finished second in the Premier League in 2002/03, but their away kit was a stark difference to some of the yellow strips worn. It featured a hypnotic blue design, with red trims on the sleeve. Sometimes you wish that shirts were used for more than just one season! 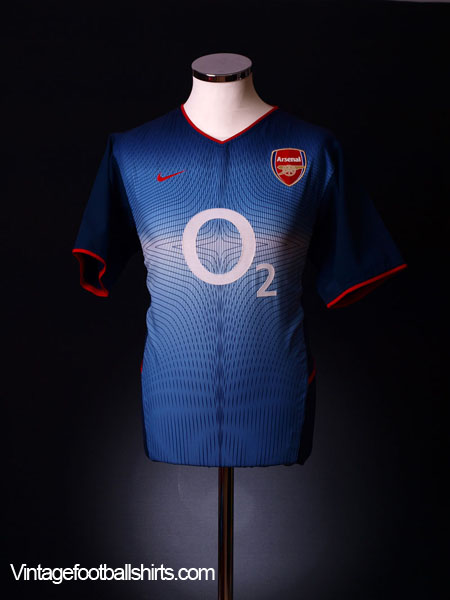 This was a unique Arsenal kit, specially designed for their final season playing at Highbury. It featured the same colours as the first ever Arsenal strip and it was a fitting farewell tribute to their famous old ground. 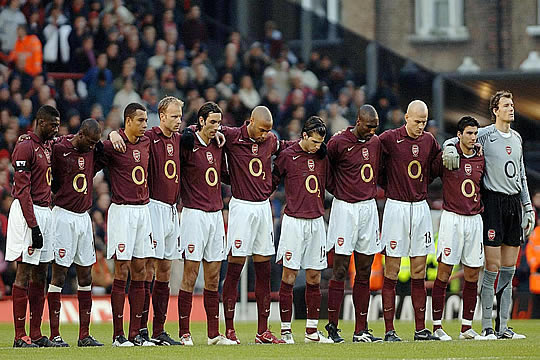 While the 2005/06 home kit was a throwback to their first ever strip, the away kit bore the classic yellow. It was worn in the 2006 Champions League final, which the Gunners lost to Barcelona. Had they won that game, it would have been the pinnacle of Arsene Wenger’s time as Arsenal manager. Instead they lost and they haven’t been the same since, especially as a move to the new ground marked a period of austerity. 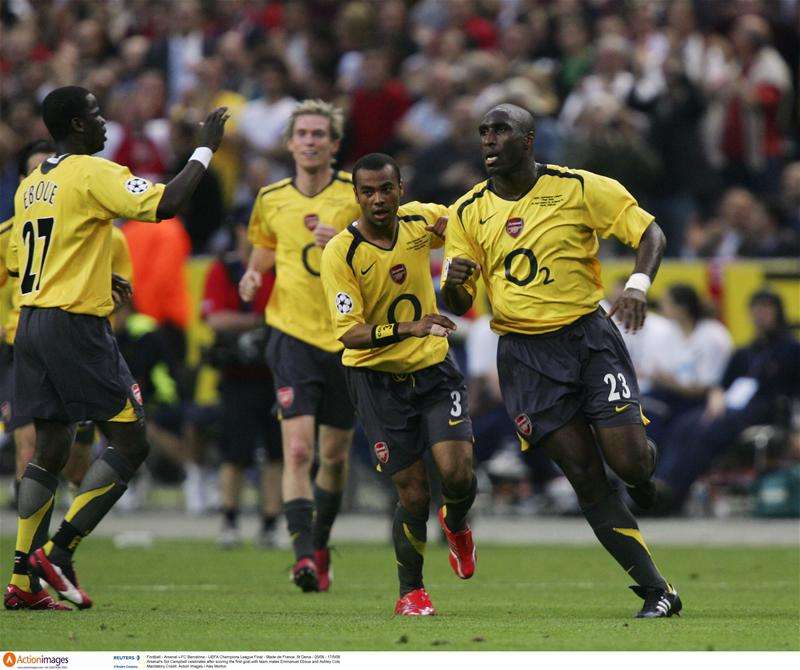 Arsenal had worn a controversial home kit for the previous two seasons, which had ditched the iconic white sleeves. However, Nike’s 2010/11 strip returned to the traditional design and was inspired by home kits from the 1970s, which also featured a white round neck collar. It’s fortunate that the home kit was good because the away strip was shocking! 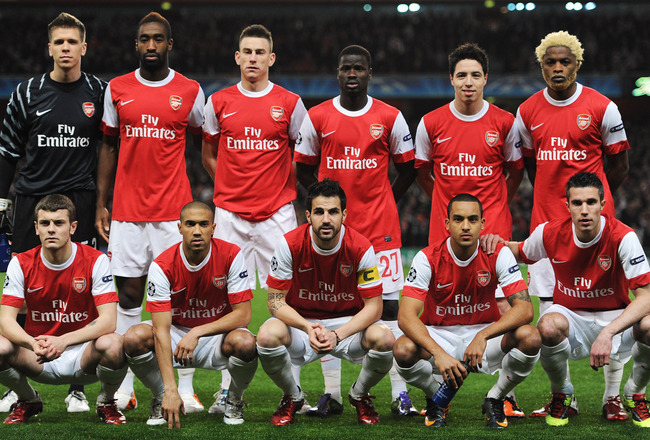 There wasn’t too much difference between this kit and the one from the season before, however the 2011/12 season was the club’s 125th anniversary. The Gunners had a special crest to mark the event, featuring 15 laurel leaves on the left side of the badge to reflect the detail on the reverse of the sixpence pieces paid by 15 men to establish the club in Woolwich in 1886. The 15 oak leaves on the right were a tribute to the founders who would meet in the Royal Oak pub. 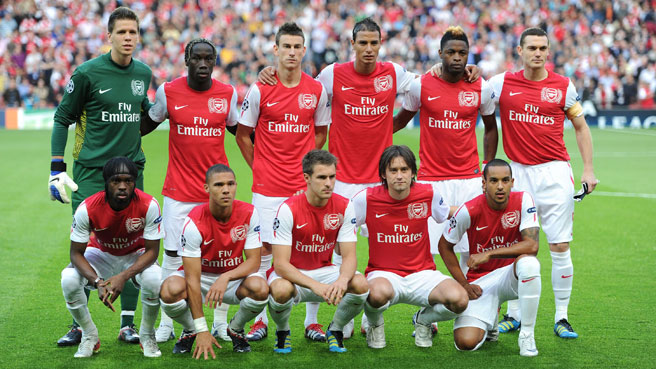 What will they wear next season?

Arsenal’s shirt for the upcoming season is… surprise… red with white sleeves. Puma have claimed that it is a “celebration of the past and present, a modern silhouette in a deeper more historic red.” The kit was launched in a living room, which obviously pays tribute to where they’ll be watching the Champions League from this season!

Can we guess what the world’s largest football stadiums are?
Women’s Sports? You Bet!