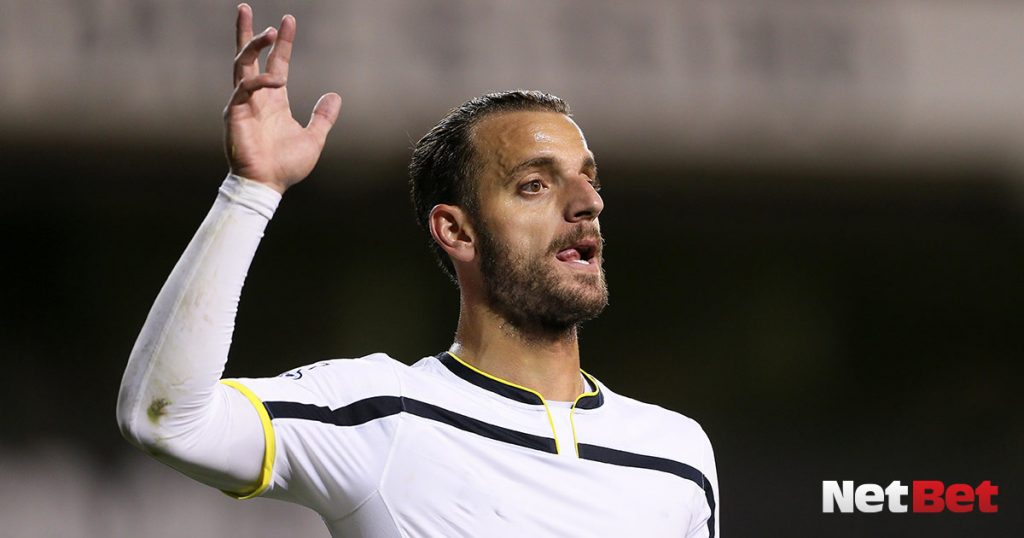 After over 25 years, the Premier League has seen some great strikers like Alan Shearer and Thierry Henry, but it’s also seen some absolute dross in its time too. Names like Simone Zaza, Sergei Rebrov and Jeremie Aliadiere are all household names when it comes to disappointing strikers in the Premier League.

However none of those three players have made it onto this list, so who is the worst striker in Premier League history?

Helder Postiga was highly thought of during Porto’s treble-winning campaign in 2003 and Spurs paid £6.25 million for him.

Unfortunately, his time in the Premier League wasn’t happy and he scored just one goal, in a 2-1 win in February 2004 before returning to Porto.

Roberto Soldado had to shoulder the burden for Spurs after they sold Gareth Bale. He was signed following three prolific seasons at Valencia, but failed to live up to his reputation in the Premier League.

Spurs spent £26 million on the striker, but he managed just six goals in his first season, with four of those coming from the penalty spot. Mauricio Pochettino benched him after he replaced Andre Villas-Boas and he later returned to Spain.

Manchester City spent £18 million on Jo shortly after being taken over in 2008, but within a month his future at the club was clear. He scored just once in nine league games and was sent out on loan to Everton in the middle of the season.

He was initially successful at Goodison Park, scoring five goals in 12 games, but was suspended after returning to Brazil without permission over the Christmas period.

Wenger thought that he was investing in a future world class star when he plucked Sanogo from obscurity in France, but he was very much mistaken.

He was a tall striker, but wasn’t even close to being good enough for Arsenal and loan spells away from the club were hardly inspiring. He was released in 2017 and has since scored 12 goals in 56 games at Toulouse.

Liverpool spent £2 million on Sean Dundee in 1998 when Gerard Houllier and Roy Evans were joint managers. They had hoped that Dundee would act as cover for Michael Owen and hopes were high for the South African-born German striker.

However, he made just three substitute appearances before returning to Germany to play for Stuttgart.

Rasiak made a solid impression in the Championship with Derby and attracted the likes of Martin Jol and Tottenham in August 2005. However, after six months at Spurs, he proved to be way out of his depth.

He joined Southampton on loan and eventually made the move permanent and once again flourished in the lower leagues. He later returned to the Premier League to play for Bolton, but his stint with the Trotters was very similar to his one at Spurs.

Mateja Kezman was a star in the Eredivisie, but completely flopped when he moved to Chelsea in 2004. He scored 105 goals in four years at PSV, but scored just four in his time in West London.

His most famous Chelsea moment came when he finished off a cross from a yard out against Liverpool in the League Cup final.

Three years after scoring against England in Euro 92, Brolin arrived for Leeds, but he was a failure at Elland Road. He scored his first goal via a rebound and piled on weight after suffering from injury.

His time in England was highly controversial, following a backfiring April Fool’s Joke, a £90,000 fine for attending his father’s 50th birthday and subsequently missing a match and when he became Attilio Lombardo’s interpreter at Crystal Palace.

Balaban arrived at Aston Villa for £5.8 million after being top scorer in the Croatian League with Dinamo Zagreb. However he really struggled in England, making just nine appearances in two and a half years, seven of which came as a substitute.

He joined Brugge in 2003 after being released and returned to goalscoring form with the Belgian team.

Spurs spent £17 million in 2016 on Vincent Janssen to try and ease the burden on Harry Kane. Janssen had been prolific in his native Holland with AZ, but he struggled in a similar way to Roberto Soldado.

He scored six goals in all competitions, four from the penalty spot, and was sent out on loan to Fenerbahce the following year. He was sold to Mexican side Monterrey this summer.

Xisco was at one point Newcastle’s seventh choice striker and manager Kevin Keegan left the club shortly after his arrival, angry at the fact that the club had signed a striker behind his back. Despite having seven strikers in the squad, including Michael Owen, Obafemi Martins and Mark Viduka, Newcastle still got relegated that season.

Xisco scored on his debut, but that was as good as it got. His contract was eventually terminated in January 2013.

Despite being one of their worst strikers, Erik Meijer is remembered fondly at Anfield. He scored just twice for Liverpool, both goals in the same game against Hull in the League Cup, but all he really did was just run around a lot.

A year after leaving Anfield, he joined the supporters as they travelled to Dortmund ahead of their UEFA Cup win over Alaves.

Norwich flexed their financial muscle in 2013 by signing Ricky van Wolfswinkel, but he completely failed to justify his transfer fee.

He scored on his Premier League debut, but that was his best moment in a Norwich shirt. By April of the same season he’d managed just eight shots on target as the Canaries were relegated back to the Championship.

Cardiff broke their transfer record after gaining promotion to the Premier League in 2013 by paying £8 million for 20-year old Danish striker Andreas Cornelius.

He was hampered by injury, but in the 11 games he played, he failed to score and was sent back to Denmark in January 2014. Owner Vincent Tan launched an investigation into his signing, believing that the club paid too much money for him.

Fulham needed a striker to help save themselves from the drop in January 2014 and they broke their transfer record to sign Konstantinos Mitroglou. Despite paying £12 million for the Greek international, he made just three appearances due to injury, fitness and form issues.

After Fulham were relegated, he returned to Olympiakos where he scored the winner against Atletico Madrid in the Champions League.

Victor Anichebe’s longevity in the Premier League is the stuff of wonders. He spent 12 years with Everton, West Brom and Sunderland, but scored just 27 goals in 197 appearances. This equates to roughly one goal every seven or eight games over 12 years!

Afonso Alves has gone down as the player that depicts why signing players from the Eredivisie is not always the best idea.

Alves cost Middlesbrough £12.5 million and his goal return of 10 from 42 games isn’t too bad, but he’s a symbol of Boro’s relegation team of 2009 and goes down as a Premier League legend for the wrong reasons.

Stephane Guivarc’h was the French striker during their 1998 World Cup triumph, but didn’t do much during that tournament. However, Kenny Dalglish saw enough in him to bring him for £3.5 million to Newcastle.

He scored on his debut, but Dalglish got the sack soon after and when Ruud Gullit took over, Guivarc’h was shown the door.

Ade Akinbiyi was signed by Leicester as a replacement in 2000 and he scored nine goals in his first season at the club.

His second season was a different story however and his time at the club was epitomised in a 4-1 defeat by Liverpool, where he missed three sitters.

In 70 Premier League games for Hull and Sunderland, Jozy Altidore scored a grand total of two goals. He had all the attributes to be a good striker in the top division, but it just didn’t happen for him.

He was poor on the ball and terrible in front of goal, which is a bad combination when you’re supposed to be leading a side to battle against relegation. His strike rate of one goal every 35 games is unlikely to ever be broken.

Crystal Palace: Are they as bad as we think?
World Cup 2018: Who has qualified so far?