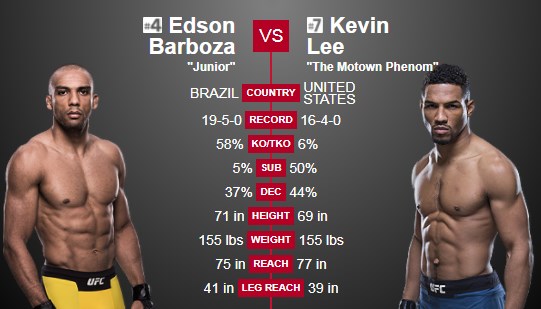 The UFC is heading to Atlantic City this weekend for another stacked fight card. On paper, there are a lot of competitive matches – which leads to some awesome betting opportunities.

Reminiscent of Frankenstein’s monster, Leslie Smith likes to wade forward while blocking punches with her face. Because she’s got a good chin and there aren’t many big punchers in the women’s bantamweight division, it’s hard to stop Smith’s forward momentum.

While Smith is not the most technical striker, she throws a lot of volume which can fluster her opponents. This is enough to earn her victories in certain matchups, but I don’t think it will suffice here.

While a little undersized, Aspen Ladd looks like a good prospect. She throws solid boxing combinations and is dangerous from top position.

This matchup could go either way if it stays standing but I think Ladd has the wrestling ability to get the fight to the mat. Smith is tall, long in the limb and has a high centre of gravity, which doesn’t help for defending takedowns.

Dvalishvili’s previous opponent, Frankie Saenz, was a renowned Division 1 wrestler – yet Dvalishvili was able to dominate the grappling exchanges. Many people, myself included, thought Saenz was fortunate to be granted a decision victory by the judges.

Despite being a monstrously strong grappler, Dvalishvili’s output dropped significantly in the second half of the fight. As a heavily muscled fighter with an energy-taxing style, this isn’t too surprising. Dvalishvili also showed that he’s very raw in the striking department.

While Ricky Simon is a good wrestler, he’s light years ahead of Dvalishvili when it comes to striking fundamentals. Although he took this fight on short notice, Simon should be in shape. After winning his previous fight last month within the first minute, he found out he’d be joining the UFC that evening so decided against the typical post-fight party indulgences.

So long as Simon can avoid getting suffocated and smothered by the physically imposing Dvalishvili, I think he handedly wins the striking exchanges. Simon is the play at 20/39.

While Nakamura is one of the more entertaining fighters in the UFC, I question whether he has the kind of skill set that can trouble elite opponents.

He has a dangerous submission game, but isn’t a great wrestler. On the feet, he shows some good counters and deadly body kicks, but his head movement his non-existent. This doesn’t bode well against a well rounded fighter like Tony Martin who has a crisp jab.

I think the fight will be primarily contested on the feet, with Martin landing the more eye-catching shots. Nakamura sometimes shoots takedowns in order to steal rounds in the eyes of the judges, but I don’t think he’ll have that opportunity against a skilled wrestler like Martin.

While I believe Martin will win the fight, I can’t recommend playing his moneyline at 4/11. If the line for Martin by points is anywhere near even money, this could be worth looking into.

In a battle of two excellent grapplers, it’s difficult to predict who will come out on top.

Using his judo base to full effect, Johns is renowned for taking down and smothering his opponents. In his fight against Albert Morales, his boxing looked vastly improved. However, against a decorated collegiate wrestler like Aljamain Sterling, Johns is going to have to rely on his grappling more than his striking.

Johns wouldn’t be the first European prospect to look great against regional opponents only to come undone against a legitimate American wrestler. Johns has not fought the highest level of competition and this should be a gigantic step up.

Conversely, Sterling has been fighting some of the best bantamweights in the world. Sure, he took losses against Marlon Moraes and Raphael Assuncao, but he holds victories over Renan Barao and Takeya Mizugaki. Sterling’s last 7 opponents are all superior to anyone Johns has faced.

Sterling has proven himself to be a top 10 bantamweight, while Johns has merely proved that he’s worthy of being in the UFC. Johns could be a world-beater, but at the moment we just don’t know. I’ll take my chances on the fighter who has shown his skills work at the highest level. Aljamain Sterling is the play at 20/23.

Both fighters are well rounded but have shown a preference for striking in recent fights. I think this will primarily be contested on the feet.

Bahadurzada hits really hard. Oftentimes when a fighter has natural power, they have no compulsion to refine their striking fundamentals. This could be the case with Bahadurzada, who throws a lot of wild hooks and can look sloppy at times. At 34 years of age, I don’t think we’re going to see him change his approach moving forward.

While Chagas may not have the same concussive power as Bahadurzada, I believe he’s the superior technician. At 24 years of age, Chagas is still a work in progress and we could see a more evolved fighter in this outing.

Both fighters have shown questionable cardio in the past. However, Bahadurzada puts more steam behind his shots than Chagas, which makes me think he’ll be the first one to slow down if he doesn’t score a knockout.

I like a play on Chagas at 20/23. I think he should be a bigger favourite.

This feels like a bit of a mirror match: two athletic wrestlers with serviceable striking and terrible punch resistance.

When Cummins gets hit, you genuinely fear for his safety. Any shot that lands cleanly has Cummins dancing like a chicken. He’s been finished with strikes on 4 occasions so far.

His counterpart, Corey Anderson, has been finished with strikes 3 times. Frustratingly, Anderson was winning against Gian Villante and Ovince Saint Preux before being finished in both matches.

When two strong wrestlers clash, we often see a striking battle. Anderson is certainly the more technical striker and Cummins is dreadful defensively.

At 28, Anderson is in his athletic prime while we’ve likely seen the best that Cummins has to offer at 37. I like Anderson as a slight favourite at 4/5.

Given that both fighters have poor chins, I think there is value on under 2.5 at 9/5.

Stylistically, this matchup is very intriguing. Edson Barboza is one of the most menacing strikers in the division. When he’s given space to operate, he will obliterate anyone in front of him with a devastating array of kicks.

In order to nullify Barboza’s best weapons, Kevin Lee has to apply pressure and force the Brazilian kickboxer to exchange at boxing range. Michael Johnson had success against Barboza using this approach.

Alternatively, the path of least resistance would be to wrestle Barboza to the mat. Lee is arguably the second best wrestler in the division and you can bet this will be part of his game plan.

Lee has to be careful, because a perfectly timed high kick from Barboza will leave him lying face down on the canvas. However, I think Lee is skilled enough to ground Barboza, take his back and sink in one of his trademark rear naked chokes.