With the 2018 tournament in Russia underway and featuring 32 different countries, many would assume that all players involved would be from their respective countries. However, as a result of globalisation and many other factors, this is no longer the case and there’s plenty of diversity in not just football, but the world of sport today. Think Mo Farah, who arrived from Somalia as a 9-year old and has become Team GB’s greatest-ever track athlete.

Thanks to the Multicultural World Cup graphic, we are now able to see how diverse the tournament in Russia is. We can also see that many more nations than the 32 involved will play key parts in the tournament.

Who are the most diverse teams in the competition?

France and Morocco are head and shoulders ahead of the rest of the field when it comes to diversity in the World Cup. 91% of France’s squad, or 21 of the 23 players, are defined by this graphic as multicultural. 13 players have parents or ancestors who’ve migrated from Africa, while both Thomas Lemar and Raphael Varane migrated as players from Guadeloupe and Martinique respectively.

Morocco have 20 players with multicultural backgrounds, 87% of their squad. Eight players have parents who migrated from France, while more further afield, Yassine Bounou’s parents migrated from Canada.

France and Morocco are the only two countries to have over 80% of their squad with multicultural origins. The third highest is Switzerland with 65%, while Australia are fourth with 65%. The only other country to have a multicultural percentage of over 50% is Portugal.

Who are the least diverse teams in the competition?

43% of England’s squad have come from multicultural backgrounds, from all over the world. According to the graphic, Gary Cahill’s ancestors migrated from the Republic of Ireland, while there are also many players whose families have migrated from the Caribbean, most notably Raheem Sterling.

There are also two players who’ve parents have migrated from Africa. Danny Welbeck’s parents hail from Ghana, while Dele Alli’s originate from Nigeria. This was noticed in the recent friendly between England and the Super Eagles, with Nigerian fans booing Alli for turning down the opportunity to represent his country of origin. 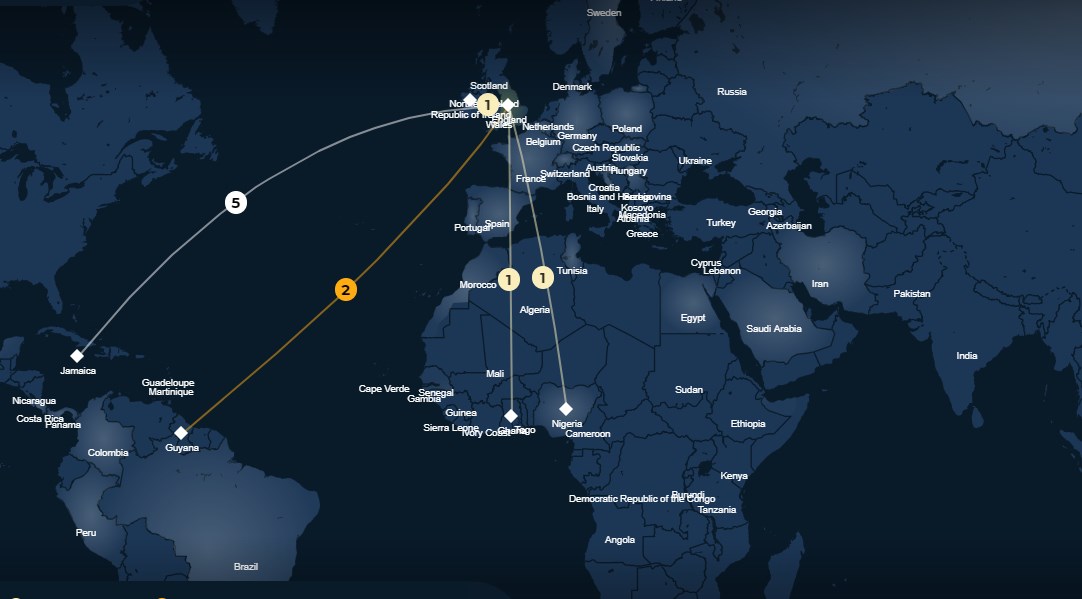 Are there any surprises?

It depends on your definition of surprise, but there are certainly some big players who you wouldn’t have thought come from multicultural backgrounds.

The top two players in the world also come from contrasting backgrounds. Cristiano Ronaldo’s ancestors migrated from the Cape Verde Islands, while Lionel Messi has some long-lost Italian ancestors.

Messi isn’t the only Argentinian to have Italian origins though, as Paulo Dybala, Javier Mascherano and Angel Di Maria also have Mediterranean roots, while Cristian Ansaldi migrated from Italy to Argentina as a player. Other Argentine players to have mixed ancestry are Gonzalo Higuain, who is of Basque origin and left France at the age of 10 months, while teammate Sergio Aguero has Lebanese ancestry.

Diego Costa is well-known for switching allegiance from Brazil to Spain, but Filipe Luis is the only player in the Brazilian squad to have originated from elsewhere, with ancestors moving from Poland.

You can check out the graphic here!

W. Cup Group D Predictions, Betting Tips and Group Preview
From Baywatch to I’m a Celeb. Who are the WAGs to look out for this summer?