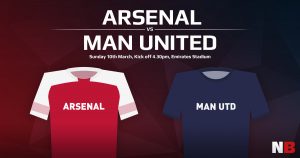 Arsenal and Manchester United are meeting once again this Sunday at Emirates Stadium. Only a single point now separates them in the league table, and former Gunners midfielder Paul Merson has said that whoever loses this match will end up missing out on a spot in the top four. Manchester United currently sit at fourth – but can the Gunners edge them out?

Despite predictions of a winner-takes-all bout, if Arsenal are defeated they may still have a shot. United are undefeated domestically so far. But Arsenal have won two out of their last three Premier League home matches against them. Manchester United definitely have the edge, but things could quite easily go the other way.

Lucas Torreira will be absent, after having been banned from playing for three games.

Anthony Martial, Nemanja Matic, and Ander Herrera are all set to play in Sunday’s game after recent absences due to injury. Jesse Lingard, Phil Jones, and Antonio Valencia are all confirmed unavailable.