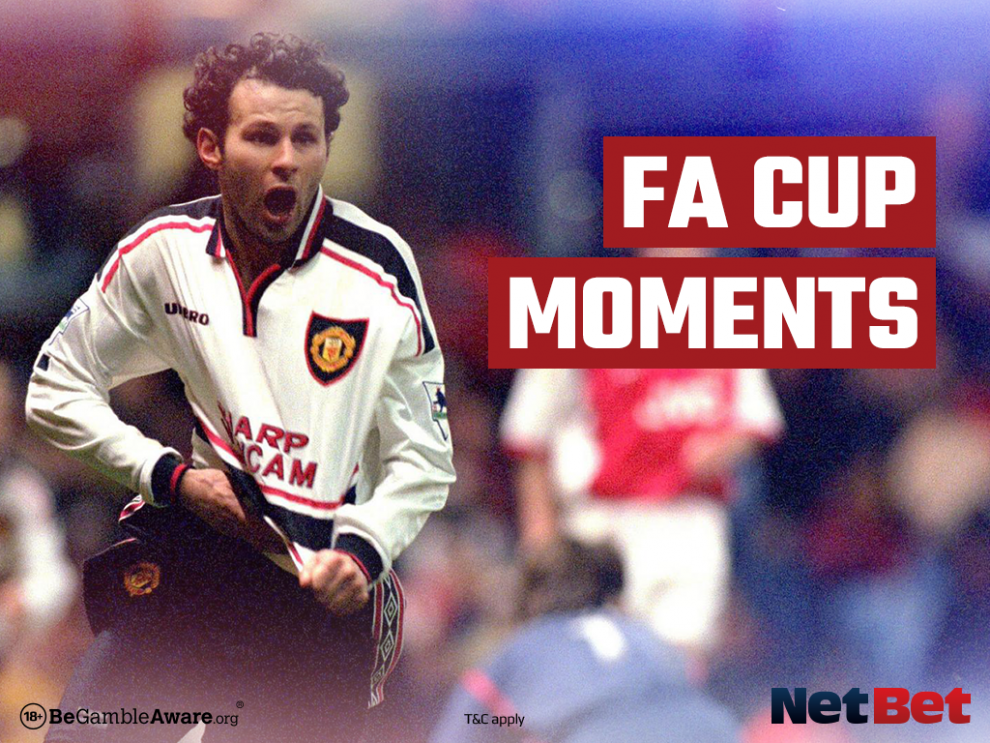 The FA Cup has produced some truly iconic moments over the years. Last minute winners, non-league giant killings, sensational solo goals – this historic competition has seen it all. We’ve delved deep into the football archives and produced a list of NetBet’s top five FA Cup moments.

Honourable mentions go out to Paul Gascoigne’s free kick against Arsenal, Bert Trautman playing on with a broken neck, estate agent Tim Buzaglo’s hat-trick for sixth tier Woking against West Brom, and all those other spectacular scenes serving as a reminder that the magic of the cup lives on.

The country watched on as Manchester City comfortably dispatched of massive underdogs Wigan in the 2013 FA Cup final. At least that’s what was supposed to happen. The reality couldn’t have been further from the prediction, as Roberto Martinez’s side battled their way to a remarkable FA Cup victory.

After recovering from a broken leg earlier in the season, nobody could have imagined what would happen when Ben Watson was subbed on in the 81st minute. Shaun Maloney’s injury time corner was glanced on at the near post by Watson, as a helpless Joe Hart watched the ball sail over his head into the top corner. Wigan had done it for the first time in their history, and Ben Watson was the hero.

After storming their way to the 1987/88 league title, Liverpool were on track to become the first team to win the double twice, but the infamous Crazy Gang had other ideas. Wimbledon had only been in the football league for 11 years, but they found themselves ahead thanks to a Lawrie Sanchez header.

When the Reds were awarded a penalty in the 60th minute, you couldn’t help but think the momentum was about to shift. John Aldridge had netted 26 league goals that season – surely he wouldn’t miss. Cue Dave Beasant in his wonderful yellow jersey. He leapt to his left to brilliantly deny Aldridge and become the first ever goalkeeper to save an FA Cup final penalty, and thus the Crazy Gang had beaten the Culture Club.

The 1989 FA Cup might be the only final remembered as fondly for its events off the field as on it. Just a month prior, the Hillsborough disaster shocked the world, with 97 fans dying as a result of the horrific scenes on that day. Nobody was quite sure what would happen when Liverpool met Everton in the FA Cup final.

Faith in humanity was restored. In a Merseyside derby like no other, fans of the Reds and Blues sat together and sang ‘You’ll Never Walk Alone’ in unison. In fitting fashion, Liverpool emerged 3-2 victors after an Ian Rush extra-time winner, but the scenes on the pitch could not quite eclipse those on display in the stands.

The only moment not to occur in a final – but it’s fairly obvious why. Two teams at the peak of their powers met in the 1999 FA Cup semi-final replay, as the rivalry between Sir Alex Ferguson and Arsene Wenger raged on. After Dennis Bergkamp cancelled out David Beckham’s opener, the tie was forced to extra-time and the stage was set.

The ever-reliable Patrick Vieira had a pass intercepted by Ryan Giggs on the half-way line, with the substitute fresh-legged and raring to go. What happened next was truly mesmerising as the Welshman waltzed his way through four defenders before hammering the ball past a helpless David Seaman. Giggsy wheeled away in celebration, shirt windmilling above his head, incredible chest of hair on full display. United went on to win the FA Cup, Premier League and Champions League in one of the most successful domestic campaigns to date.

It had to be number one didn’t it? It is perhaps the greatest goal the competition’s ever seen – and it came in the last minute of a final! West Ham’s early 2-0 lead soon vanished as a result of goals from Djibril Cisse and Steven Gerrard, but the Hammers found themselves back in front midway through the second half thanks to goalscoring sensation Paul Konchesky. As the time ticked away, the Irons edged closer to FA Cup ecstasy.

Captain Stevie G, Liverpool’s greatest ever servant was not about to give up on the club’s seventh FA Cup triumph. With injury time on the board and hope ebbing away, the ball bounced up invitingly around 35 yards out – there’s not many players you’d rather have coming onto it. Gerrard unleashed an absolute thunderbolt from his right boot, as the ball arrowed into the corner of the West Ham net, sending the Liverpool faithful into uproar inside the Millennium Stadium. The Reds went on to win the trophy on penalties, of which Gerrard scored one of course, capping off a remarkable FA Cup final performance.