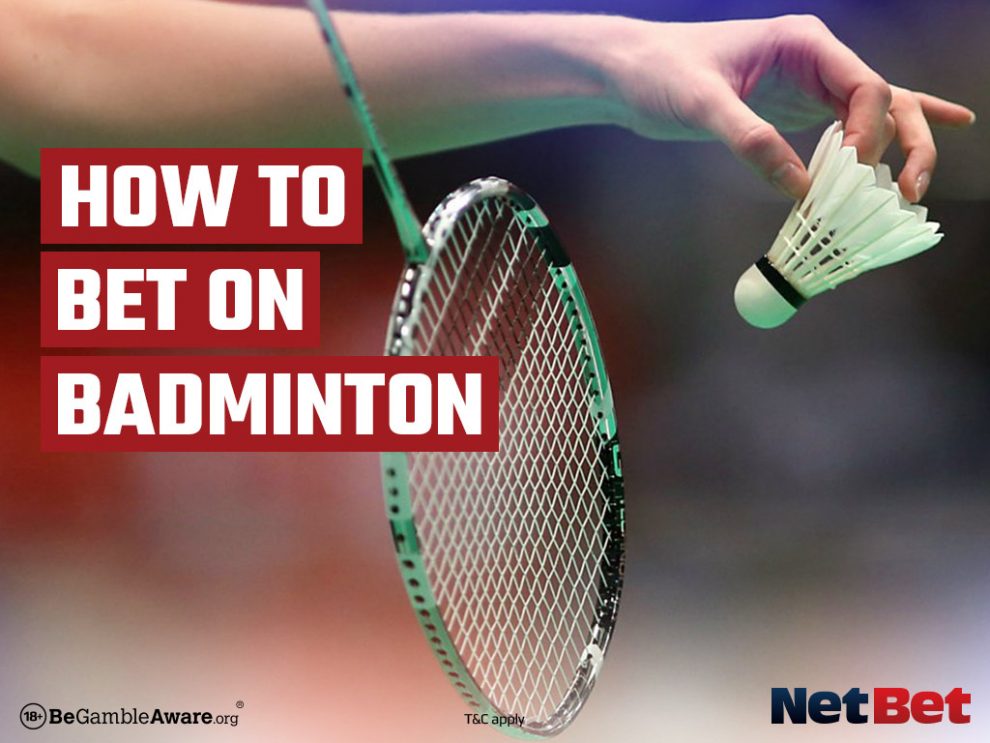 Here at NetBet, we’ve got a whole load of great markets for sports betting, and we offer some of the best badminton odds around. We don’t just take bets on major competitions, we offer online betting on a huge array of badminton tournaments on our UK betting site. If you want to place any sport bet, here’s a quick guide on how exactly you should go about it.

Badminton is a racket sport traditionally contested by two (singles) or four (doubles) players on an indoor court separated by a 1.5 metre net. The aim of the game is to hit the shuttlecock (commonly referred to as the birdie) over the net and land it within the opponent’s half of the court. The shuttlecock is what distinguishes badminton from other racket sports – instead of the standard ball shape, it is made up of feathers or synthetic materials which are attached to a heavier rubber base. The design of the birdie results in its unique flight, being struck at incredible speeds of nearly 500km/h, before rapidly decelerating due to the drag created by the feathers.

The two biggest competitions in the sport of badminton are the World Championships and the Olympics, both of which have been dominated by Asian countries since their inception. Since badminton was introduced as an Olympic sport in Barcelona in 1992, 34 out of 39 gold medals have been claimed by three countries: China (20), Indonesia (8) and South Korea (6). Denmark (2) and Spain (1) are the only countries outside of Asia to have won a gold medal in eight Olympic Games. However, Denmark’s Viktor Axelson won the men’s singles gold medal at Tokyo 2020, so there is always the possibility for improvement in the European game.

The exact history of badminton – as is the case with many sports – remains somewhat obscure. The earliest signs of the sport date back nearly 2,000 years to ancient Greece, where a similar game was played for exercise and leisure. However, the most concrete evidence of the early game originates from mid 19th century India, where a racket sport called Poona was played. The game was adopted by the British military stationed in India in the 1960s, and the addition of a net and court proved the first change that forged the game into the one we recognise today. It is thought that when the army officers returned to England, they introduced the game to the upper class at the Duke of Beaufort’s estate, Badminton House, thus coining the name which is still used today.

The game underwent a number of revisions in the early days, leading to the establishment of the Badminton Association of England (now known as Badminton England) in 1893. This body was responsible for the publication of the first ruleset, followed by the creation of the All England Open Badminton Championships in 1899. They were also one of the founding members of the International Badminton Federation (now known as the Badminton World Federation) in 1934, alongside Scotland, Wales, Ireland, Denmark, France, Netherlands, Canada and New Zealand. This organisation remains responsible for overseeing international badminton to this day. They were also responsible for creating the BWF World Championships in 1977, as well as helping to have the game recognised as an Olympic sport for the first time in 1992.

Although the modern history of the sport is often traced back to England, the success in the game has largely remained where its roots lay, in Asia. Of the 121 medals available across all forms of the sport at the Olympics, 106 have been won by Asian countries. Similar trends can be seen throughout the history of the World Championships, with Spanish athlete Carolina Marin the only player from outside of Asia to compete consistently on the biggest stage in the past decade.

How do I bet on Badminton?

Here at NetBet, we focus mainly on the winners market for badminton as it is by far the most popular. However, we do cover a wide variety of competitions outside of the World Championships and Olympics, so there is no shortage of betting opportunities.

The winner betting market is incredibly simple to grasp and is one of the reasons that betting on badminton has become increasingly popular over the years. It requires you to predict who will be victorious come the end of the game.

In many sports you can often find yourself with too many betting markets to choose from, and that can make deciding on the best bet a tricky task. There is no danger with that in badminton, as you only need to pick a winner. This means you can sit back and enjoy the incredible movement, shuttlecock speed and athleticism of the world class talent on show.

It’s worth keeping an eye out on the badminton markets when a major event such as the World Championships or Olympics come around, as we may choose to add a number of new betting options to the site. Also, occasionally we might choose to Boost a price which you can find at our Promotions page.