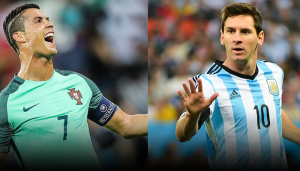 The fountain of knowledge that is the NetBet Twitter account (link) asked you, our loyal fans as to who you thought was a better player, Messi or Ronaldo. It wasn’t as close as some other polls, but hats off to the 6% who thought that they’re both overrated. And deep down, we all know that Emile Heskey is better than both of them. But forget about Heskey as he retired years ago, we’re here to solve one of the great mysteries of modern society, whose better Lionel Messi or Cristiano Ronaldo?

Lionel Messi started his youth career at Newell’s Old Boys in Argentina, before eventually making a name for himself at Barcelona. Madeira born Cristiano Ronaldo started at Sporting Lisbon, where Sir Alex Ferguson spotted him when Manchester United played Sporting in a pre-season friendly. He later moved to Old Trafford, before moving to Real Madrid for a then world record transfer fee.

Aged 31, Ronaldo is the older of the two superstars, whilst the diminutive Argentinian is 29 years old.

Messi has won five Ballons d’Or, whilst Ronaldo has won three. The Portuguese star however has claimed his World Player of the Year awards in two different countries, the only other player to achieve that feat was the Brazilian Ronaldo.

The European Golden Shoe is awarded to the player with the highest number of goals scored in all of Europe’s leagues. Ronaldo won the award once at Manchester United and a further three times at Real Madrid, making four in total. On the other hand, Messi has claimed the award three times.

Ronaldo has won an incredible 17 club trophies in his career, including winning the league in 2 different countries. Ronaldo can also boast his recent Euro 2016 win over Messi. The Argentinian has yet to win any international honours, but did finish as a runner up in the 2014 World Cup. However, Messi has gone on to win an astonishing 28 club competitions, including an historic sextuple in 2008/09.

What’s been said about them?

“For me, to watch Messi play is a pleasure – it’s like having an orgasm – it’s an incredible pleasure.” Luis Figo

“Messi is the best in the world without any doubt and for me the history of football.” Luis Enrique

“Although he may not be human, it’s good that Messi still thinks he is.” Javier Mascherano

“It is clear that Messi is on a level above all others. Those who do not see that are blind.” Xavi

“For the world of football, Messi is a treasure because he is a role model for children around the world… Messi will be the player to win the most Ballon’s d’Or in history. He will win five, six, seven. He is incomparable. He’s in a different league.” Johan Cruyff

“I have seen the player who will inherit my place in Argentine football and his name is Messi. Messi is a genius.” Diego Maradona

“I like Messi a lot, he’s a great player. Technically, we’re practically at the same level.” Pele

“There have been a few players described as the new George Best over the years, but this is the first time it’s been a compliment to me.” George Best on Ronaldo.

“He is the best. The best in the world, yes. Probably the best ever. I saw Maradona a couple of times. I never saw Pele. But Cristiano is amazing. This man is the best… Cristiano is a goals machine. He is an incredible player. He is like Zidane, there will never be another Ronaldo.” Jose Mourinho

When Ronaldo gets the ball, you can just leave him to it while he beats player after player.” Ryan Giggs

“He does things I have never seen from any other player and it really is marvellous to watch. It takes a great player to grab the bull by the horns and make things happen, but he has done it repeatedly.” Bobby Charlton

“He’s six foot, fit as a flea, good looking. He’s got to have something wrong with him. Hopefully he’s hung like a hamster, that would make us all feel better. Having said that, me missus has a hamster at home, and his cock’s massive.” Ian Holloway 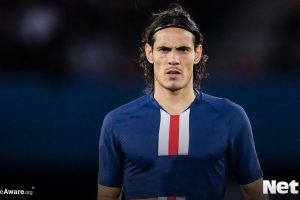 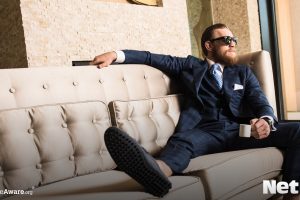