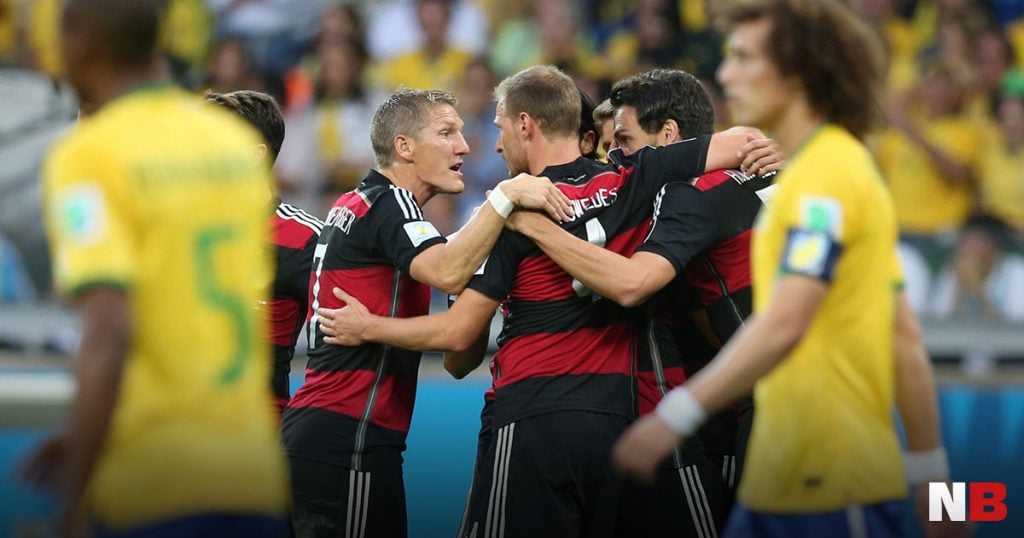 Everyone loves an underdog story. David verses Goliath, Rocky verses Ivan Drago, and any number of smaller countries and teams against the giants of football. Every now and then, a giant is slain, the odds are upset and a moment is created that lives on long after anyone involved has retired. We have a look at some of the biggest of these.

There are few times in history where the England team has been so strong or so dominant. Arriving in Brazil for the W. Cup, they were 3-1 favourites to win the whole thing. But first there was the formality of sweeping past the 500-1 amateurs, the USA. And they really were amateurs. The team comprised of a dishwasher, mailman, undertaker and a decorator. There were so few American football players that half the team weren’t American: there were four Italians, two Portuguese, an Irishman, a Scot and a Haitian, Joe Gaetjens, who scored the only goal of the game. Legend has it that the British press were unable to process the score, and assumed that the wrong result had come in. Consequently, they reported the final score as 10-0 to England, rather than 1-0 to the USA. Sorry lads, it doesn’t work like that.

With the favourites out of the way, it was looking good for the host nation, Brazil, to take home the trophy. It would be fair to say that the locals got a bit overconfident. They had good reason to feel that way – in the previous year’s Copa America, Brazil had destroyed all opposition, beating Uruguay 5-1. This was not going to be a problem. All they had to do was win the game, and the party could start. So in front of an estimated crowd of 200,000 people at the newly built Maracanã Stadium in Rio, the game got underway. The final score was 2-1 to Uruguay, with the minnows’ celebrations clearly audible in the suddenly silent stadium. The event became known as ‘The Agony of the Maracanã’, and the Brazilians promised themselves never to fall prey to such hubris again. Oh dear.

It’s a matter of debate as to whether this truly counts as a shock or not. On the one hand, Germany were no minnows. Before the 2014 W. Cup started, they were a place ahead of Brazil in the FIFA rankings and this would have been their fourth consecutive semi-final. Both were undefeated coming into the match, and Germany were the slight favourites. So why is this classified as a shock? Mostly because of the effect it had on the Brazilian team and fans, but also for all the records that were smashed. Brazil’s national team had not been beaten at home since 1975, a run of 62 matches. It was the biggest winning margin in a W. Cup game, as well as the worst loss by a host nation. Miroslav Klose’s 16th W. Cup goal made him the tournament’s all-time top scorer, replacing the Brazilian Ronaldo. But really, it’s the images of the stunned and shaken crowd, filmed in stunning high definition, that really underline that yes, this was a bit of a shock.

From a game with a lot of goals, to one where there were surprisingly few. Romania do not really have a reputation for making world-beating football teams, but the 1986 European Cup was the exception. They had a relatively easy run to the final, facing teams such as Anderlecht, Vejle and Lahti. Their opponents, Barcelona, had a harder run, having to go through Porto, Juventus and Sparta Prague. When they met in Seville, everyone was expecting Terry Venables’ Barca to steam through them. But what they had not counted on were two people. Firstly, the Steaua coach, Emerich Ienei, had a plan, and he stuck to it. By all accounts, it was a horrible game of football. The Romanians ‘parked the bus’ and for 120 minutes, nothing happened. But then came the genius of Ienei’s plan, and the second key figure of the night: Helmut Duckadam, the Steaua goalkeeper. With no result after extra time, the match went to penalties, and on that night, Duckadam was unbeatable, saving all four of Barcelona’s penalties.

Five days before playing in the opening game of the W. Cup, one Senegalese team member dared another to steal a gold necklace. Khalilou Fadiga was questioned by South Korean police and the whole incident threatened to engulf the team. But it proved to be just the thing the coach needed to give his players a boost. “The only way people can forget about this,” he told them, “is to beat France.” So they did. It was a huge surprise to the world, but it really should not have been. After all, the vast majority of the team were basically French themselves. They had been brought up there, they played their football there, and could, had they chosen to, have taken French citizenship. They were not playing an unknown team, they were playing friends and colleagues. Rattled, the winners of the previous W. Cup came bottom of their group and did not progress.

Dubbed ‘the Shock of Gibraltar’, Celtic’s defeat at the hand of part-time team the Lincoln Red Imps is probably the worst in the club’s history. Half the Lincoln team had worked a full shift before turning up to play their Champion’s League second round qualifying game, including a policeman, fireman and taxi driver. The first half was dominated by Celtic but they could not find their range and ended goalless. Three minutes into the second half, however, Lee Casciaro scored the game’s only goal. Not the best start to a managerial career for Brendan Rodgers, but he took it well.

Every time the UK hosts a world cup – no matter what the sport – there’s an adoption. During the 2015 Rugby World Cup, it was Japan after they beat South Africa. But in 1966, it was the most unlikely of countries, North Korea. They did not exactly have a rough time qualifying for the competition. Their only opponents were Australia, as South Korea had already withdrawn from the competition in protest, and South Africa were banned. This left Australia, who were comprehensively drubbed, leading North Korea to qualification, and Middlesbrough. The locals were wary at first, but after Pak Do-ik scored against a strong Italian side, the visitors were taken to heart. They proved so popular that when North Korea advanced to the next stage, 3,000 ‘Boro fans travelled to Liverpool to support them, and things were looking good with the Koreans scoring 3 goals before half time. Sadly, it was not to be, as Portugal beat them 5-3.

Greece came into their second ever Euro Championship as dark horses, having strung together an unbeaten run of 15 matches in qualifying. It was almost enough for them to have gotten that far. Now, if all they could do was win a single game, they could go home, proud and happy with what they had achieved. But it didn’t quite work out like that. Greece won 2-1 in the opening game, sailed through the competition, and for the first time ever, met Portugal again in the final. They won 1-0, a huge 80-1 upset and gave the world the gift of seeing young upstart Cristiano Ronaldo in floods of tears.

This is probably the ugliest game in our list, but that’s fine, Argentina are no strangers to ugly when they need to be and it’s only right that they find themselves on the receiving end for a change. It was a nasty, physical match with the underdog African team proving themselves the South Americans’ equals when it came to strong-arm tactics. This match could be included in several top ten lists, including a list of the worst tackles in history. Two minutes before the end of the game, Claudio Caniggia took off from just outside his own penalty area. He passed one Cameroon defender, then another… and then Benjamin Massing steamed in and clattered Caniggia so hard, his own boot flew off. Not surprisingly, he received a red card, the second for Cameroon that game. And yet Francois Omam-Biyik managed to score from a header shortly into the second half. The World Champions were defeated and nine-man Cameroon had managed to put African football on the map in the best way possible.

Yes, we’re cheating. The number 1 spot in our list of most shocking moments in football is not a plucky underdog story, but an act of God. In 1998, two South African teams were playing in Johannesburg when lightning struck the ground. None of the players were hit directly, but the shockwave was enough to send several of them to the ground, writhing in pain. Several were taken to hospital. This was not the first time that lightning had struck during a football game. In fact, just days later, an entire team of 11 men were killed by a lightning strike in the Democratic Republic of Congo, while their opponents escaped unscathed.