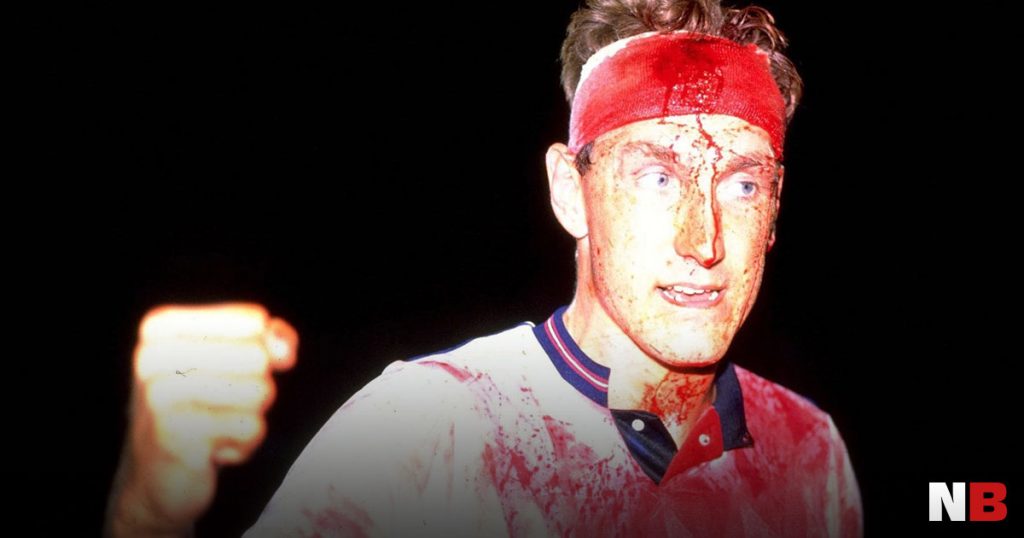 To kick off this list of weird football injuries, we have one that’s barely an injury at all. Whilst playing for Manchester City in 2011, Balotelli was a whole minute late arriving for the second half against Dynamo Kiev in the Europa League. After the whistle blew, it was clear the Italian was in some discomfort, rubbing a swollen face. After his grass allergy forced him to throw in the towel, he was replaced by Carlos Tevez.

Most people can remember this injury in horrifically vivid detail. After all blood does show up so well on England’s white strip. Terry Butcher had soaked the entire front of his shirt after sustaining a head injury during England’s World Cup qualifier against Sweden in 1989. He helped maintain a 0-0 draw to get England a crucial point to qualify.

Football injuries can be bizarre or horrific, but rarely end with an amputation. In 2004, Servette’s midfielder was in the throes of celebration after the teams third goal against Schaffhausen in the Swiss Super League. He vaulted the metal fence to join the fans on the stands but caught his wedding ring in the process. Most of his finger came away with it and the digit could not be reattached. To pour salt in the wound, he was given a yellow card for celebrating too much.

On this list, there are plenty of broken bones… but a torn anus? Mascherano secured Argentina’s place in the 2014 World Cup final with an incredible tackle on Netherland’s Arjen Robben. The last-minute play on the ball was a feat of athleticism, but Mascherano’s exertions earned him a very sore bum. A young fan even commemorated the moment with a tattoo.

Sometimes the only reaction to an injury is pure denial. In 1999, West Ham’s Stuart ‘Psycho’ Pearce broke his leg in the first half against Watford and played on through the pain, even the second half. Six months later, the exact same thing happened against Nottingham Forest but not even Pearce could walk this injury off. He refused to be stretchered though and walked off the pitch as if it was nothing.

Mexico ’86 will be memorable for England captain, Bryan Robson, for all the wrong reasons. Leading the nation’s squad at the World Cup should have been the highlight of his career but it was marred by pain. Dogged by injuries throughout his career, Robson’s trick shoulder had a habit of popping out of socket with every other tackle making for stressful watching for any England fan. It would go on to shatter his ‘86 World Cup dreams during a match against Morocco when an opposing player grabbed him and wrenched the shoulder.

Goalkeepers often try to lead from the back, but it doesn’t tend to get them injured. This was the unfortunate fate of Manchester United’s, Alex Stepney, when he shouted at his defenders just a little too much in 1975. He managed to roar himself to a dislocated jaw during a match against Birmingham City. With no backup keeper, a midfielder was forced to step in and kept a clean sheet.

Most footballers would have to keep an eye on the opposition if they feared a crippling injury. In a really unfair world you might even be put out of action by your own teammates. But a pitch invading dog is not what any goalkeeper is prepared for. In 1970 while keeping Brentford’s goal against Colchester, a dog started chasing a ball up and down the pitch before colliding with Brodie’s knee. The commentator probably didn’t know that Brodie’s career ended with that dog when he said, ‘what a great tackle!’, as the goalie lay on the grass.

Probably the most extreme case of succeeding in walking off an injury, comes from ex-POW turned Man City goalie, Bert Trautmann OBE. During the 1956 FA Cup Final, he broke his neck but carried on to make some great saves. Apart from sometimes touching his neck as if he had twinged it, all seemed OK with the keeper as Man City went onto win against Birmingham City 3-1. He maybe remembered mostly for this brave performance, but his honours are for improving Anglo-German relations since the Second World War.