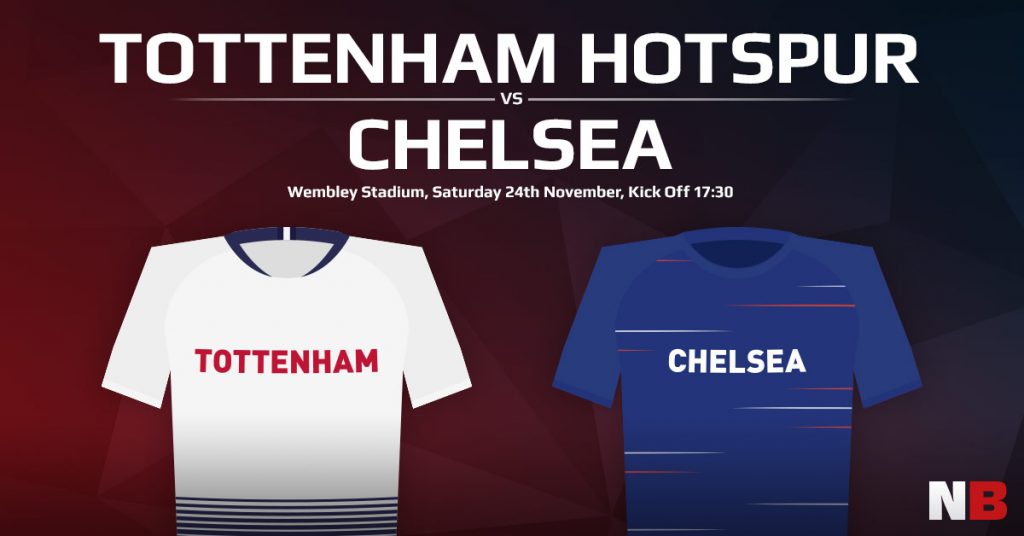 One of London’s biggest football rivalries resumes on Saturday evening when Chelsea travel to Wembley to take on Tottenham Hotspur. This rivalry has intensified in recent years, with Spurs’ progress under Mauricio Pochettino ensuring that they’re now competing directly with Chelsea for the Premier League title and a top four finish. In fact, it was only two years ago that the Blues came from two goals down at home to deny Spurs a maiden Premier League title in what became known as the Battle of Stamford Bridge.

The two sides are again evenly matched in this year’s table, with Chelsea in third place on 28 points, while Spurs lie fourth, just a point behind the Blues with 27. However, it’s been a turbulent season for Pochettino’s side, who, since beating Manchester United 3-0 at Old Trafford, have had some mixed results and have lost three games in total. Although, only one of those three defeats have come in their last six games and that came against Manchester City.

As for Chelsea, they remain undefeated in the Premier League this season, with eight wins from their 12 games so far, although this will be their toughest test since taking on Manchester United over a month ago. In matches against the other “big six” teams this season, they’ve seen two draws against United and Liverpool, while they beat Arsenal in their second game of the season, a match they arguably should have lost. Defensively they’re weak and Spurs could carve them apart if they’re given the opportunity. As is often the case with Chelsea, if Spurs can find a way to stop Eden Hazard, who tops this season’s goal charts in the Premier League, then they could find a way to inflict a first defeat on Maurizio Sarri as Chelsea manager.

This could be one of the most exciting games of the season and I’m expecting both teams to score and lots of goals in the game. Chelsea have been thrilling to watch going forward, while defensively they’re weak. If Eriksen and Kane play well, then they could find a way past the Chelsea defence, while Hazard has the ability to torment Aurier down the left flank.

Kieran Trippier withdrew from the England squad with an injury and looks set to miss out for Spurs this weekend. However, Dele Alli got some game time for Gareth Southgate’s side in the international break and is likely to start at Wembley on Saturday.

Mateo Kovacic missed Croatia’s match with England through injury, but looks to have regained fitness in time for the trip to Wembley this weekend. However, such has been the form of Ross Barkley, Kovacic might have to settle for a spot on the bench.