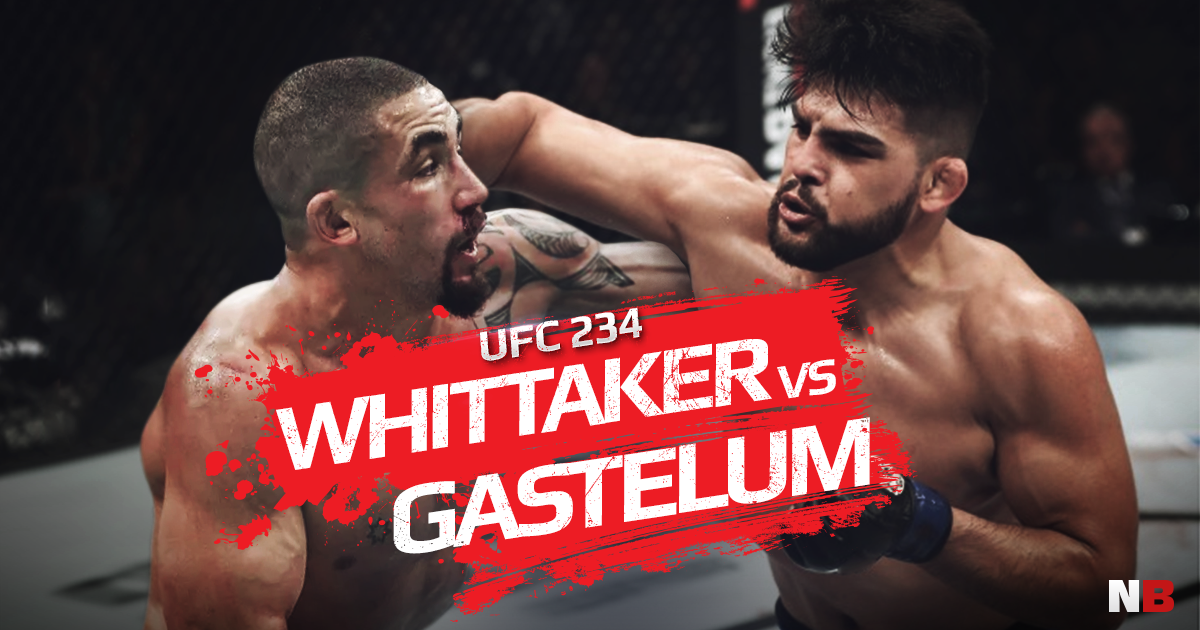 The UFC travels to Melbourne, Australia this weekend for a Middleweight Title fight between current holder and local favourite Robert Whittaker and Kelvin Gastelum. Also on the card, the highly anticipated meeting between Israel Adesanya and Anderson Silva, while grapplers Ricky Simon and Rani Yahya meet on the undercard. We take a closer look at the fighters to see if we can figure out which of them has the advantage on Saturday night.

While the middleweight division is not as stacked as some of the UFC’s weight classes (take Lightweight, for example), there are some very dangerous men out there. Whittaker has faced two of them in his last three fights, Ronaldo ‘Jacare’ Souza and Yoel Romero. Jacare was knocked out and the two fights against Romero were both hard-fought wars, the last winning 2018’s Fight of the Year. Whittaker’s chin was tested on several occasions during those fights and did not seem to even come close to cracking.

Like Whittaker, Gastelum made his way onto the main UFC roster by winning The Ultimate Fighter at the age of 21, the youngest in the promotion’s history. His low centre of balance means that he’s hard to push around and he has extraordinary power. Like Whittaker, he has some impressive scalps under his belt, including Jacare and Michael Bisping.

A true champion, Australia’s Whittaker is currently on a nine-fight win streak and hasn’t lost for the last five years. He stands apart from almost everyone else on the roster by refusing to take part in pre-fight trash talk, preferring to let his fists and feet do the talking. Whittaker seems to make the most out of his 73-inch reach, exploding toward his opponents with overhand rights and flurries of blows. Unable to see due to the sheer number of blows flying towards their faces, his opponents usually duck or move to one side in order to avoid the barrage… which is what Whittaker planned all along and now they are ready for a huge kick to the side of the head. He comes into this fight a healthy favourite and we don’t think Gastelum has enough tricks in his bag to change this. Whittaker to win by decision (at least). 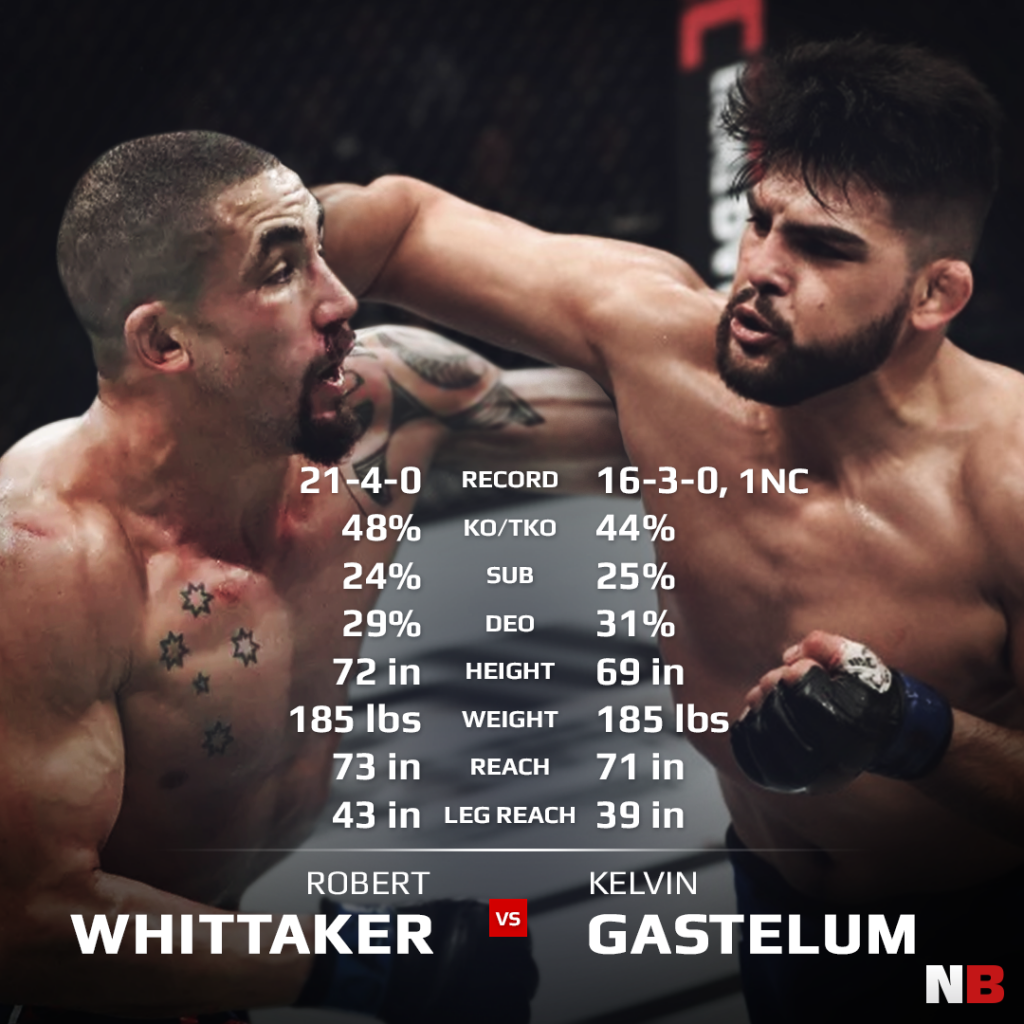 The legend meets the legend-in-waiting. This is one of those rare occasions when we have two fighters with very similar styles coming together at opposing ends of their careers. Let’s face it, Anderson Silva has spent most of his MMA career as if he was in The Matrix. He came into the UFC in 2006 and demolished Chris Leben in under one minute. Next, he beat Rich Franklin for the UFC Middleweight title, which he then went on to defend for 14 fights and six years (a UFC record). His extraordinary style entranced viewers – he seems to toy with his opponents, goading them, testing them and ultimately, discarding them. He was finally dethroned by Chris Weidman in July 2013. The interesting thing about both those losses is that Weidman didn’t really win; in the first fight, Silva was clowning and got clipped. In the second, he broke his own leg kicking Weidman.

The damage was done. His victory over Nick Diaz was overturned for a failed test, and defeats to Michael Bisping and Daniel Cormier followed shortly. A victory over Derek Brunson a year ago put a stop to the sharp decline in results, but even then, he was a shadow of his former self. There were flashes of the creativity and control that he had become synonymous with, but otherwise, he was a little slower, a little softer and no longer looked like he was operating on an entirely different level.

‘The Last Stylebender’ was born in Nigeria but moved to New Zealand as a teenager. Inspired by the classic Muay Thai movie Ong Bak, Israel began to study kickboxing and amassed a 32-0 amateur record before turning pro. He won 75 bouts out of 81 and currently has a 15-0 MMA record. When you see him fight, it’s not surprising. He moves (or rather stands still) just like Silva, choosing odd angles, landing with every punch thrown and occasionally exploding into action with something amazing. When the two meet, it should be an extraordinary match-up between two unique fighters. But unless Silva has something very, very special up his sleeve, we see the torch being passed to Adesanya before the third round.

There’s not a whole lot else on this card to get too excited about. There are no less than five fighters making their debut, and opportunities for local talent from Australia, New Zealand and Asia to make their mark. Of the recognisable names on the card, Lando Vannata will be doing his part for FightPass and fighting on the prelims. We also have the return of “Smile’n” Sam Alvey (though it’s looking a bit more like a grimace these days) and while Teruto Ishihara is always entertaining on the mic, he’s got one win in five recently and will need to impress before he falls out of favour.