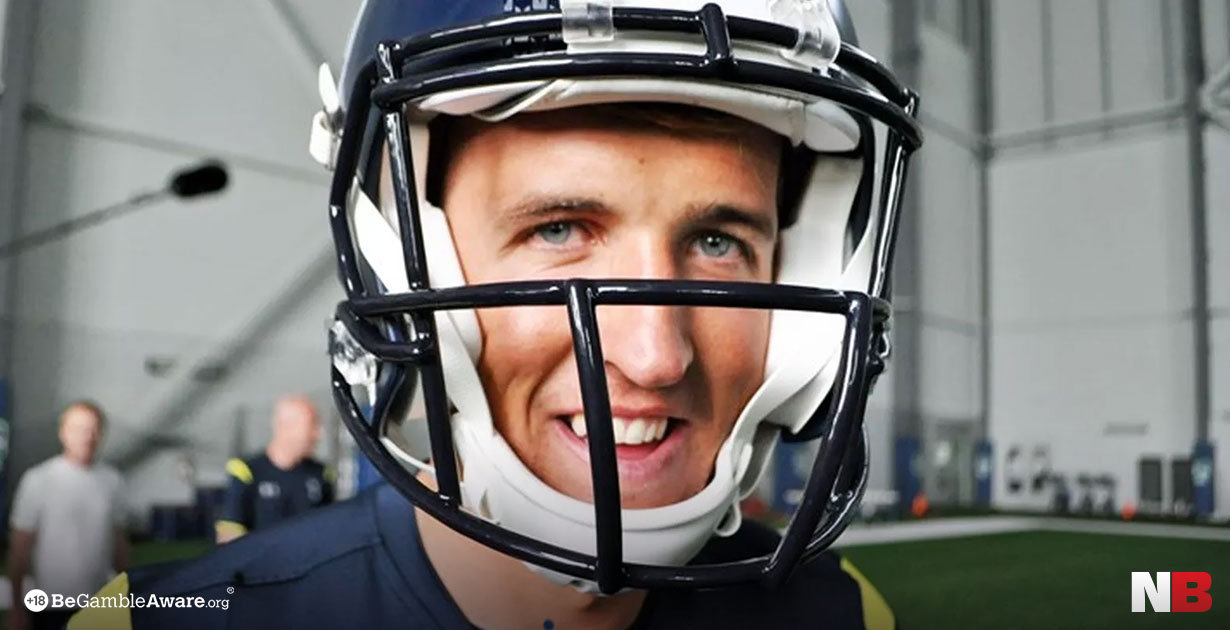 In approximately 10-12 years’ time, assuming all goes well for him, Harry Kane will be ending his professional football career. But instead of a quiet life as a pundit, podcaster or even team captain on A Question of Sport, Kane has more ambitious plans. He wants to be a kicker in the NFL. This is a brave move, because by then, Harry Kane will be 35(ish) and there’s nothing that American football players love to do more than straight-up murder a kicker when they get the chance. But the more important question for Kane (other than his chances of survival) is whether he can successfully make the move from the highest level of one sport to another.

Professional soccer player Harry Kane shows off his American football skills with some encouragement from NFL players. Subscribe to the NFL YouTube channel to see immediate in-game highlights from your favorite teams and players, daily fantasy football updates, all your favorite NFL Network podcasts, and more!

Rugby, but with Armour

He would not be the first. In fact, there are a couple of UK sports stars from a different background currently playing for the NFL. Christian Scotland-Williams, for example, caught the eye of NFL scouts with this bone-shaking tackle from his days in the Worcester Warriors pack. Eight months later, he was making his debut for the Pittsburgh Steelers, and taking a huge sacking as a welcome into the NFL. Interestingly, he was not the only former rugby player on the field that day. Former Australian Rugby League player Jordan Mailata was also making his debut for the opposing team, the Philadelphia Eagles. Christian Wade, Scotland-Williams’ former Wasps team-member, has just signed with the Buffalo Bills and will be hoping to make an impact as a running back during the 2020 season.

Probably the most successful player to make the move from rugby to American football is a former Newcastle and London Irish player, not to mention the former England Under-20s Captain, Alex “Shaggy” Gray. He has been in the NFL a bit longer, and even managed to captain his team, the Atlanta Falcons, in a pre-season game.

But is it all one-way traffic? Has anyone ever made the switch from the NFL to rugby? In a word… no. There are some very simple reasons for this. To start with, the salary in the NFL is far greater than that of most other sports, particularly rugby, so it makes very little sense from a financial perspective. Secondly, you expect a person to go from one sport in which they run headlong into each other with helmets and pads to a sport where they run headlong into each other without helmets and pads? You’d have to be mad. Or just really, really fast.

Carlin Isles burned Matt Turner and a few others putting on a show. Also, he got run over @ the Port Elizabeth 7s 2013

Isles Have Some of That

That’s the story with Carlin Isles. Isles played a bit of college football but was mostly a track and field athlete. He had a hugely impressive 100m time of 10.24 and was the 35th ranked sprinter in the USA. As amazing an achievement as that is, it was unlikely to make him a household name, and so Isles began looking for a sport where he could distinguish himself. Rugby Sevens provided him that opportunity. Playing for the USA, his ridiculous pace making everyone else look like they were wading through treacle. Unfortunately, there aren’t too many people as talented as Carlin Isles, but that doesn’t mean you can’t play two different sports at the highest level. You just have to make sure that the second of the sports is a little less taxing than the first. In other words, baseball.

This is one of the more rare versions of the famous Nike “Bo Knows” series of commercials. This is the full 60 second spot with the women cyclists. I’ve never seen this version with the biker chicks anywhere since the time I recorded it back in 1989 while taping the MLB All-star game.

There have been many American athletes who decided to make the switch to baseball after their main sporting careers were over. When Michael Jordan announced his first retirement from basketball in 1993, few expected to see him sign for the MLB team, the Chicago White Sox (although the team owner might have helped with this, seeing as he was also the owner of the NBA’s Chicago Bulls). Despite drawing in huge crowds, it didn’t really work out. Having bounced around a few small teams for a year or so, he was back in the NBA in 1996.

Deion Sanders had the opportunity to make sporting history in 1992. He started the day playing against the Miami Dolphins with the Atlanta Falcons in the NFL. The Dolphins won that game, but Sanders had no time to reflect on that loss. Instead, he boarded a plane in order to make it to Pittsburgh in time to play in the MLB for the Atlanta Braves. Unfortunately, he remained on the bench for that game (which the Braves lost) which is unfortunate because if he had taken the field, he would have been the first athlete to play in two different sports on the same day.

Bo Jackson is probably the most successful two-code athlete, though quite honestly, he could have succeeded at just about any sport he wanted (as implied by Nike’s hugely successful Bo Knows campaign). He could have gone straight into baseball, having been picked by the New York Yankees in the MLB draft in 1982. Instead, he chose a football scholarship in order to be the first member of his family to go to college. There followed an extraordinary college and NFL career before the switch to baseball. Unlike Jordan or Sanders, Jackson could really play, whether it be hitting home runs at will or pulling off extraordinary acrobatic feats in the outfield. Bo Jackson managed to become an all-star in two major American sports, before retiring at the ripe old age of 32. Three years younger than Harry Kane will be when he wants to start playing American football. Have you considered taking up darts instead, Harry?

Manchester United vs Chelsea Predictions, Betting Tips and Match Preview
Do The Right Thing… But was it?