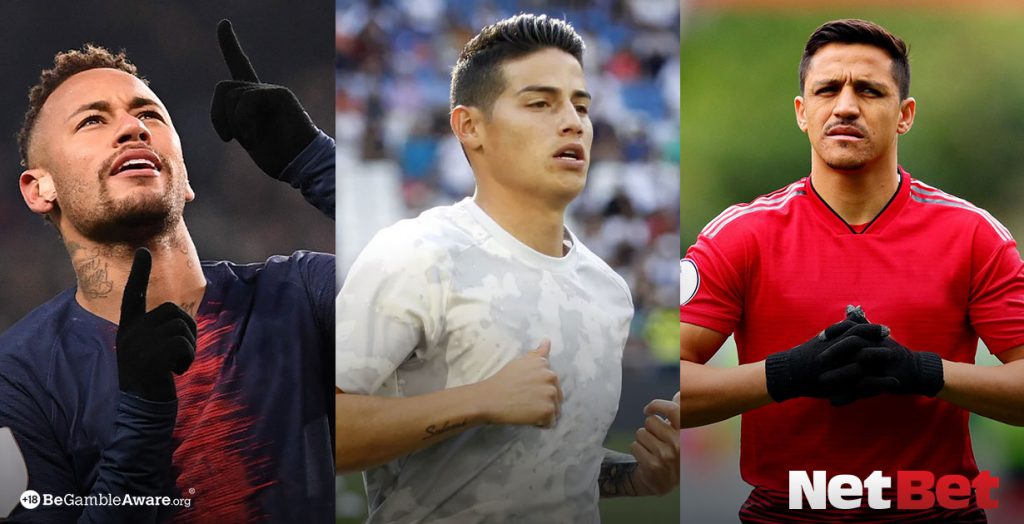 There are just a few days remaining before the 2019 European Transfer Window shuts, and there are several big names and a few big clubs still with some huge decisions to make. Let’s take a look at some of the headliners looking to make some moves, starting with the world’s most expensive footballer, Neymar, Jr.

The Brazilian wonderkid signed to Paris St Germain two years ago, but only really played for one. Sure, he performed relatively well, scoring 27 goals and helping them to two domestic titles. But they could have accomplished this with just about any other striker. When you’re the most expensive player in the world, people expect a little more, like for example a Champions League trophy. Then there’s the behaviour. He was finally called out by the football-watching world during the 2018 World Cup and mercilessly memed to a pulp. Then he was caught on video punching a fan. Everyone would understand if PSG wanted to get rid of the world’s most expensive petulant teenager.

But despite having good reason, it’s not PSG looking to get rid of Neymar. It’s the other way around, Neymar wants to go back to Barcelona. At least, that’s the conclusion that has been jumped to by eagled-eyed Neymar fans on social media. Apparently, his subtle ‘liking’ of any post from a Barcelona player is a clear indication that he wants to go back there. Amazingly, instead of telling the spoiled wee brat to shut it and get on with his job, both teams are working toward making it happen. The problem for Barcelona is that it’s becoming increasingly expensive and complicated. The two sides met this week to discuss an offer, which is looking like a year-long loan to Barcelona (at a cost of approximately €35 million), followed by a purchase for €170 million. It’s worth noting that this is significantly less than the €220 million that PSG paid for Neymar in the first place.

Alexis Sanchez to Inter. Can he resurrect his career?

It’s fair to say that Sanchez has not had a good run at Manchester United. He’s scored 5 goals in 45 appearances, only twice last season (and only once in the Premiership). No wonder Ole Gunnar Solskjaer is happy for Inter Milan to take him out on loan, to go along with Romelu Lukaku, who they sold to Inter for €74 million earlier this summer.

Sanchez’ wage was the stumbling block between the two clubs, but United have agreed to subsidise three quarters of the Chilean’s weekly wage, with Inter paying £100k per week. On the face of it, Sanchez’ form since moving to Old Trafford has been woeful to say the least, but if there’s one manager who’s going to make him work and work and work, it’ll be Antonio Conte.

James Rodriguez to Atletico (and what’s going on with Gareth Bale)?

James Rodriguez and Gareth Bale both played for Real Madrid last weekend. This is something of a minor miracle for both players. Rodriguez has been on loan to Bayern Munich for the last two years, while Bale’s issues with the club and manager Zinadine Zidane have been well-publicised. The Welshman was set to make the move to the Chinese Super League over the summer, until Florentino Pérez, the club’s President pulled the plug. Now they’re saying that not only is Bale going to be a big part of the team’s plans this year, but also that he’s perfectly happy at Real Madrid and doesn’t want to move. We’d find it all a lot more plausible if he’d said that himself, of course…

Zidane is making similar noises about James Rodriguez, but there are still a few days left in the transfer window, and this may be a bit of chat to drive up the price for anyone that may be interested. It turns out there are a few potential buyers sniffing around. AC Milan are due in Madrid this week for some talks concerning the future of Angel Correa at Atletico. However, there are rumours that they might make a bid for Rodriguez if things don’t go to plan. Napoli had spent most of the summer hoping to pick up Rodriguez on loan, but Real are only interested in a permanent sale. Atletico Madrid were also reported to be interested, but Real weren’t ever going to sell him to their rival. So unless something comes out of left field later this week, it seems that both are going to be staying put for the time being.

Pogba’s fate very much depends on whether a decision can be made regarding Neymar. Like a butterfly flapping its wings in Tiananmen Square, the Brazilian’s departure could spark a series of far-reaching events that would include Paul Pogba’s long-awaited move away from United. United reportedly don’t want to sell him, but he’s been unhappy at the club for a long while now, so perhaps this is justification for his high asking price of £180 million.

There are a couple of options. If the Neymar sale goes through, Juventus could sell Paulo Dybala to PSG. This could potentially give them the funds they need to buy Pogba outright. Zidane is also reportedly interested in Pogba and may make a late bid. They probably cannot afford Pogba’s price, but there’s the possibility of a loan still out there. It would leave United lacking striking power, especially with Sanchez out on loan to Inter. But since neither one has been performing particularly well recently, would it be that great a blow to the Red Devils?