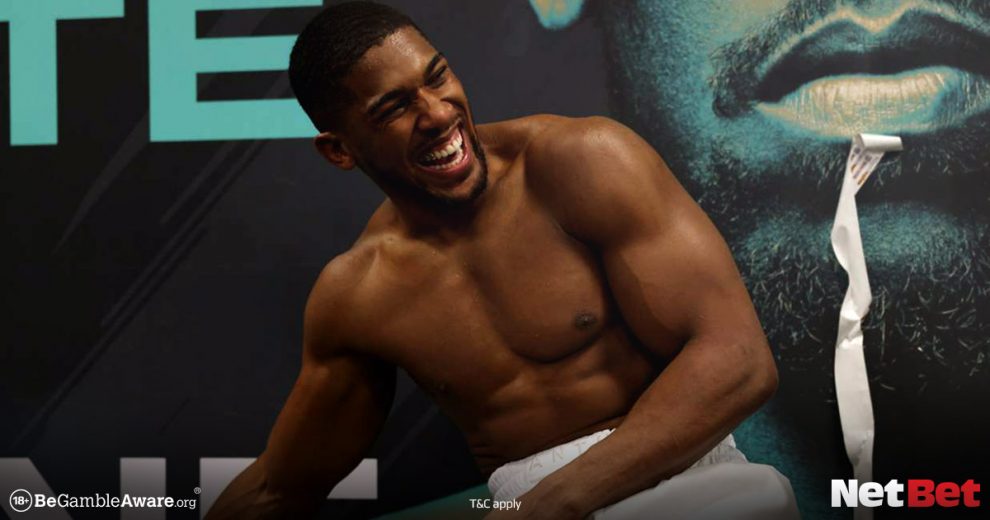 Anthony Joshua takes on one of the toughest tests of his career this Saturday night when he faces the former undisputed cruiserweight champion Oleksandr Usyk at Tottenham Hotspur Stadium and we are previewing this one at NetBet!

The unified heavyweight champion was supposed to face Tyson Fury on August 14 in Saudi Arabia, but when that fight fell by the wayside he was ordered to face his mandatory challenger; the imposing Ukrainian Usyk.

Joshua will know all about his opponent, who is being overlooked by many this weekend, having won gold at the same London 2012 Olympics, all the way through to being at his last fight against Derek Chisora last Halloween behind closed doors in Wembley Arena.

It was that fight against Chisora that gave a lot of fans pause, seeing that Usyk didn’t look quite as dominant against a slightly sub-world level opponent than he did dominating top cruiserweights like Tony Bellew and Mairis Briedis.

However, he’s now two fights into the weight, and he believes that he will be ready to face his toughest test in Joshua and take home the WBA, WBO, IBF and IBO world titles in front of a packed 63,000-seat Tottenham Hotspur Stadium.

On the undercard, there’s more world title action with the sought-after Lawrence Okolie returning to defend his WBO cruiserweight belt, once held by Usyk, against Dilan Prasovic. We also see the return of Callum Smith at light heavyweight and a massive fight between Maxim Prodan and Florian Marku. The night will even open with top prospect Campbell Hatton, son of the legendary former world champion Ricky.

Here are our Anthony Joshua vs Oleksandr Usyk betting tips.

The only person who isn’t taking Oleksandr Usyk lightly this weekend is Anthony Joshua. At 2/1, Usyk may seem an insurmountable underdog, but he is far from it. Very few people know how to win a boxing match no matter the odds like Usyk. He brutally put down Tony Bellew in his home country, and could be set for another scalp here. A clean technical showing from the Ukrainian could see him dance his way to an historic victory against Joshua, who will need to show his power early and often if he wants to get the win this time around.

Anthony Joshua to win by Decision – 16/5

Joshua has put together a very particular training camp to prepare for Usyk, and he really wants to show his technical boxing prowess this time around. It’s risky to try and outbox the faster, and more technical away fighter in this one, but we also reckon that it’ll be necessary because there’s no indication thus far that Usyk is chinny, even at heavyweight. He took some of Derek Chisora’s biggest shots at Wembley last year and didn’t seem phased, so we reckon that Joshua may need to go the distance in this one, even if he is going to win

If Anthony Joshua is to take the knockout win here, it won’t be happening early. He’ll have to wear Usyk out and we could see it going long. He stopped Kubrat Pulev in the ninth last time around, so if we had to pick a time in which he would do it, we’re going for this one just based on what history has shown us thus far.