UFC 236 comes to Atlanta, Georgia for a hotly-anticipated headliner between Max Holloway and Dustin Poirier (founding members of the Conor McGregor Survivor’s Club). While the war of words becomes increasingly dangerous and unpleasant between Khabib and McGregor, and Tony Ferguson recovers from his own personal problems, this is likely to be the biggest fight for a while in the Lightweight division. For the co-main, we get Kelvin Gastelum taking on Israel Adesanya for the Middleweight belt in what should also be an excellent match. In fact, the only cloud hanging over both these title fights comes in the form of a single word: ‘interim’.

Both the belts up for grabs are interim belts. The middleweight belt currently belongs to Robert Whitaker, who was awarded it after GSP gave it up, and now has to pass it on himself without ever defending it due to an abdominal hernia. It’s a similar story with the Lightweight Belt, which is currently held by the suspended Khabib Nurmagomedov. In a perfect world, the next title fight in both classes would be between interim and current holder for all the spoils, but ask Colby Covington whether it works that way in the UFC (clue: it doesn’t). Two more ‘interim’ belts and another potential ‘champ-champ’ dumps yet more mud into the already murky waters of the UFC’s flyweight and lightweight divisions. But the fallout from that will come down the road: right now, we’ve got some great fights to look forward to. 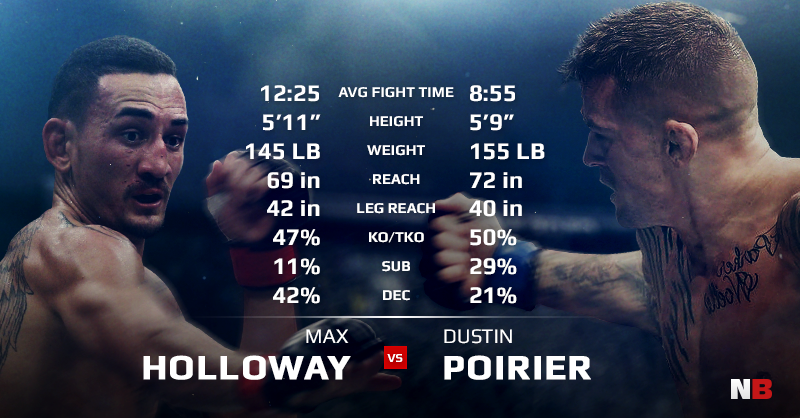 It turns out that getting beaten by McGregor on his way up only stings for a bit. It happened to both Poirier and Holloway and between them, they’ve only been beaten once in five years. Holloway hasn’t been beaten at all, but to even things up, Poirier holds the only submission victory over the Hawaiian, welcoming him to the UFC in his debut. Poirier was last seen in July last year, winning his rematch with Eddie Alvarez and being one of the few people to stop the runaway freight train that is Justin Gaethje. Poirier’s not the showman Holloway is (despite the salon-quality hair), but he’s an excellent striker, with combinations for days, some deadly knees and a great ground game.

Featherweight champion Max Holloway most recently defended his belt at UFC 231 against Brian Ortega in December. Next, he moves up a weigh class to take on Dustin Poirier for the interim lightweight belt at UFC 236 on Saturday, April 13, live on Pay-Per-View.

Holloway, however, is something else entirely. Fears of concussion or other health issues were dispelled after putting on a masterclass for Brian Ortega. His movement was too crisp, his pressure relentless and he had a secret weapon in his corner. The one weakness that Poirier may be able to exploit is his wrestling – but he’s already done that once before and Max has evolved since then. Half the fun on Saturday will be seeing how both these fighters – who have already grown so much in order to reach this point – have changed their games for this huge rematch. This might be a Fight of the Year candidate.

It’s so weird that Kelvin Gastelum is only 27, given that he’s been in the UFC since 2010. His opponents thus far have consisted almost exclusively of the old guard – Michael Bisping, Vitor Belfort and Johnny Hendricks. His last fight was a decision victory over Jacare Souza in May of last year. Now, he’s facing one of the most exciting prospects, not merely in the Middleweight division, but in MMA as a whole. Adesanya’s last bout against Anderson Silva was a hugely entertaining match-up that had the crowds roaring (especially Donald Cerrone), and now ‘The Last Stylebender’ will be hoping to add another name to his list of victims.

Adesanya will be a handful for Gastelum, who will need to be at his absolute best to progress up the Middleweight rankings. The difficulty comes in trying to find an answer for Adesanya’s rangy, unpredictable style, and for all his experience, we don’t think Gastelum will be the man to find it.

Here is the interesting thing about the current state of the UFC: following the UFC’s huge $1.5 billion move from Fox to ESPN, the UFC is doing what it can to make the new bosses happy. The unexpected upshot of this is that the ESPN fight cards are currently better viewing than the pay-per-view cards. Case in point, the Gaethje vs Barbosa card from a couple of weeks ago. There were no title fights and no huge names like Holloway or Poirier, but solid match ups all the way down the line that produced a hugely exciting night of violence. Conversely, the quality of the fighters at UFC 236 drops off really fast after the headline acts, to the extent that once you get past the two main events, there’s only one more ranked fighter on the entire card.

Former college football player Eryk Anders has one win out of four, but has been incredibly active, this being his fifth fight in 13 months. Kahil Rountree has a slightly better recent record, with a loss to Johnny Walker in his last bout and will be hoping to come back strong. He’s one of those guys who shows you nothing before the fight – no hype, no anger, no expression at all. But then he comes on strong with some powerful kicks and a left that knows where to find the off switch on just about anyone.

Alan Jouban is from Louisiana, and Dwight Grant doesn’t have a Wikipedia page, but we are now just killing time until we can start talking about Boston Salmon. Anyway, these two are going to fight. Jouban, a Versace model, is the favourite and Dwight Grant is 38 years old.

Rounding out the main card is Ovince St Preux, the no. 12 ranked Light Heavyweight in the UFC. He’ll be taking on Ukraine’s own Nikita Krylov. There’s nothing much wrong with either fighter, but they both have patchy records, both are coming off a loss and frankly, neither one really deserves to be on this PPV card.

REST OF THE CARD

The preliminary cards have a couple of recognisable names – Wilson Reis and Belal Muhammad – and a whole bunch of newcomers and journeymen to fill out the list. But there’s also Boston Salmon. This not a regional delicacy (I believe they’re more into Lobster Rolls over there) but a person’s real name. This is his first fight in the UFC, coming into the promotion by way of Dana White’s Looking For A Fight series. He’s got six wins and one loss as a pretty unremarkable bantamweight. But MMA fans and writers around the world will be thrilled to see him on this card as it gives us the opportunity to relive one of MMA’s most viral moments.

Australian commentator Michael Schiavello was obviously having the time of his life with what must be the two most unfortunately named fighters in all of combat sports. Sadly, Danny Mainus is no longer active, but we hope Boston Salmon has a long and storied career, just so we can keep posting this clip.