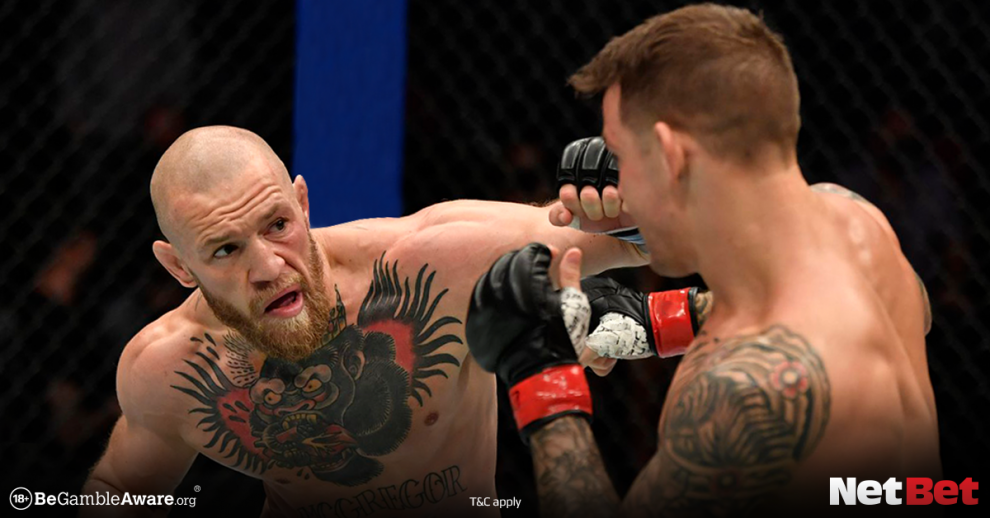 Conor McGregor is back in the octagon for his trilogy fight with Dustin Poirier on Saturday night at UFC 264.

A full crowd of fans will be back at the T-Mobile Arena, with celebrities like the 45th President of the United States Donald Trump and Grammy winner Justin Bieber expected to be part of the 20,000-strong attendance in Las Vegas.

Within the cage, McGregor has promised unfettered virus, and outside of it he has returned to his trash talking self as opposed to the nicer former champion who faced Poirier in Abu Dhabi this January.

The pair have fought twice previously, and each hold a knockout victory over the other in their respective wins.

McGregor drew first blood with a KO within two minutes of their UFC 178 undercard bout, while Poirier got his revenge almost seven years later at UFC 257 in January with a second round stoppage.

Bookies are finding it hard to split the fighters, with oddsmakers giving the ever-so-slight edge to Poirier, but McGregor has claimed he is a ‘dangerous man’ heading into a vital trilogy bout.

The winner is expected to face new lightweight champion Charles Oliveira in his first title defence later this year, while the loser is likely to face tough questions about the future of their career.

McGregor is a former two-weight undisputed champion, winning the featherweight and lightweight belts within a year of one another five years ago, while Poirier has only tasted interim gold after beating Max Holloway in a 2019 rematch.

Poirier lost his unification bout to Khabib Nurmagomedov a few months later, but he could earn himself another shot at the strap this weekend.

Meanwhile, Conor McGregor is the richest athlete in the world, and is expected to earn an eight-figure sum for competing in this bout, even if he loses again.

UFC president Dana White has implored fans to buy the PPV early to avoid streaming issues, similar to the ones that arose in America around Floyd Mayweather’s exhibition bout with Logan Paul last month.

McGregor will have to do this fight without travelling Irish fans, who have been banned from flying to US by president Joe Biden’s blanket halt on inbound EU travel.

Here are our UFC 264: McGregor vs Poirier 3 betting tips.

‘The Notorious’ has made some pretty serious vows ahead of this weekend’s bout, and has promised to brutalise Poirier for the second time in their trilogy. He was neutralised early with the calf kicks in their second fight, but if he can maintain his composure on the feet and keep it standing, he is clearly the superior boxer. He caught Poirier with a few clean, crisp shots in the opening round of their rematch, and he could stop the American in the first round once again this weekend, similarly to their first fight. We don’t believe McGregor is about to put a body on his record, but it is definitely possible that he gets an early, early, stoppage. Second round in this market is priced at 15/2 and that is also worth a look.

Dustin Poirier to win by Submission – 6/1

The American was able to stop McGregor by KO for the first time in his career last time out, but he is predicting a submission win in this fight. He told Michael Bisping of BT Sport that he was expecting to get a tapout finish to take the trilogy, but he is being given a gigantic price for that outcome. He has seven career submission victories, and is known for his ability to go into deeper waters than McGregor, so this one could come late. He hasn’t done it in a while, last getting a sub in 2012, with a body triangle leading to an injury in his fight against Anthony Pettis in 2017 the closest he has gotten to date. In fact, his last loss to Khabib Nurmagomedov saw him lose to a rear naked choke, but it is highly unlikely that McGregor shows off his jiu-jitsu skills this weekend.

He will probably get up, but we reckon Dustin Poirier will be put down at least once in this fight, and the above evens price could net you a decent little payday if you put enough on it. Assuming McGregor can stuff the takedowns he’ll be shooting for, a striking exchange between the pair will almost certainly see the Irishman drop his opponent in this bout. But be prepared for him to get back up!