The Olympic games present a real dilemma for the keen sports punter. There are just so many
events, so many athletes in contention and so many possible variances to take into account,
that the market will look too daunting to all but the most dedicated sports fan. Of course you
could bet on your home team – Mo Farah to win the 10,000m (2/9), Jessica Ennis-Hill to win
the Heptathlon (1/1) or Jason Kenny to win the cycling sprint event (19/10).

A simpler solution is to bet on the number of medals, or even more specifically, Gold medals,
that each country will win. There are 306 events gold medals to be won in total, with 47 in
Athletics, 34 in swimming and 18 each in cycling and gymnastics.

Leading online bookmaker NetBet have the USA as a clear favourite for most gold medals at
1/5, China at 7/2 while Australia and Great Britain tie for third at 30/1. The recent doping
scandal that has rocked Russia, has meant that the participation of some athletes is now in
serious doubt.Their total medal haul of 82, including 24 golds at the 2012 games, is extremely
unlikely to be reached with all competitors in Athletics banned, 22 rowers missing the trip as
well as competitors in sailing, canoeing and modern pentathlon. Their chances of being the
nation with most gold medals has slipped to 40/1. 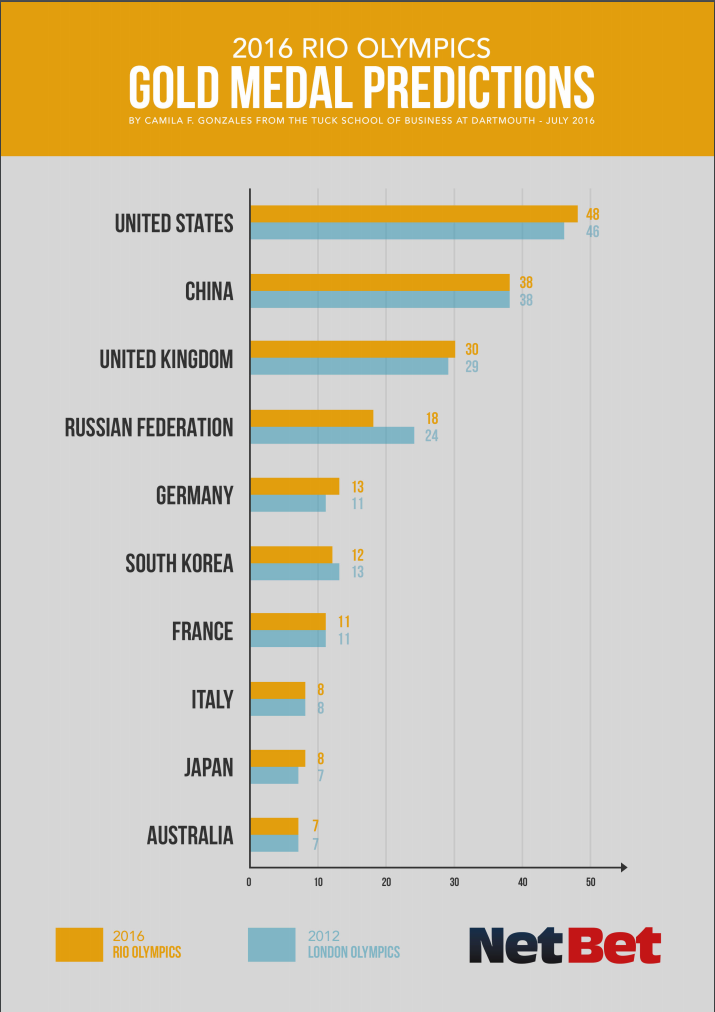 Predicting a country’s medal haul has been turned into an exercise in economic modelling by
the Tuck Business School at Dartmouth. The American business school have been publishing
their predictions since Sydney in 2000, based on a formula developed by professor Andrew
Bernard. The formula claimed a 98% accuracy in London 2012. Bernard’s model is based on
income per capita, population and past performance.
Interestingly, their recently published predictions, authored this month by Camila F. Gonzales,
suggest that Team GB will exceed their gold medal haul in London by one, 30 golds in 2016
against 29 in 2012.

NetBet spokesman Alexandre Mangaud says: “The Olympics is one of the greatest spectacles
in world sport and we know that many of our customers will be glued to the TV, watching
as the events in Rio unfold. The markets we run ensure that our customers have a reason
to watch right up to the closing ceremony, adding another level of excitement to what will
already be an incredible 16 days of sporting action.”